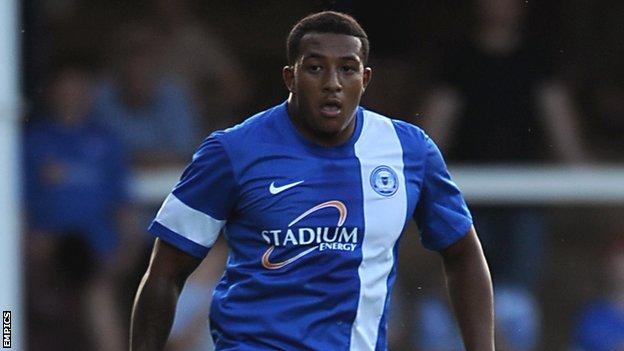 Shrewsbury's on-loan winger Nathaniel Mendez-Laing says with better guidance and a bit more patience he could still be with League One leaders Wolves.

The 21-year-old came through Wolves' academy, but left for Peterborough in July 2012 after playing only one game.

Obviously they're on a good run a the moment but they're not unbeatable so hopefully we can go there and do the job.

"As a young lad, I didn't really have the right guidance," he said, as he prepares to travel to Molineux to face his old side on Saturday.

"I just wanted to play football, if I'd have waited, my chance may have come."

Mendez-Laing, whose initial one-month loan with Shrewsbury was extended until the end of March in February, says he cannot have too many regrets about his decision to leave Molineux.

"Peterborough put two bids in for me and, after the second time, I just thought I wanted to go and play," he said.

"Everything happens for a reason though."

Birmingham-born Mendez-Laing is preparing himself to face a number of familiar faces in the Wolves side.

"There are young lads who have come up from my age group," he said. "Jack Price is a very good player in midfield and Danny Batth has been solid at the back.

The former England Under-17 international, who has played six times in his loan spell with Mike Jackson's struggling side, knows that Shrewsbury will have to be at their best to upset a Wolves team looking to extend their club-record winning run to 10 matches.

"Obviously they're on a good run at the moment," he added. "But they're not unbeatable, so hopefully we can go there and do the job.

"I feel a lot better after a lack of game time before I came but I feel sharp again. Hopefully I can finish on a high."