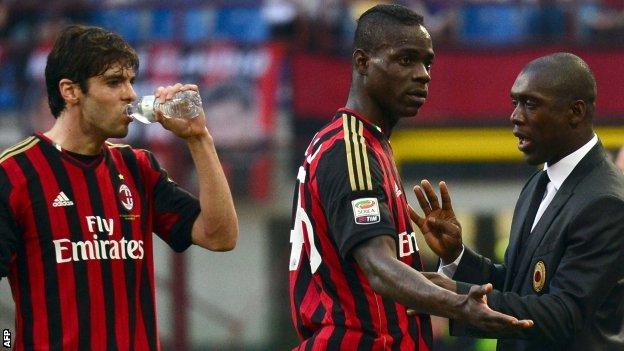 AC Milan lost a fourth match in a row in all competitions as they suffered defeat in a thrilling Serie A match at home to Parma.

The former Milan striker doubled the lead after the break before Adil Rami's header and a penalty from Mario Balotelli saw the hosts level.

But late goals from Amauri and Jonathan Biabiany secured the win for Parma.

Clarence Seedorf's Milan were knocked out of the Champions League last-16 by Atletico Madrid on Tuesday and Sunday's defeat leaves them 11th in Serie A and 12 points behind city rivals Inter.

Former Netherlands international Seedorf replaced Massimiliano Allegri as Milan manager in January and enjoyed an encouraging start to his reign, but three straight league defeats have left their season on the verge of collapse.

The Rossoneri were always facing an uphill task when Abbiati was sent off in the fifth minute for bringing down Ezequiel Schelotto.

The spot kick was converted by Cassano, who scored a second early in the second half when he fired in Afriyie Acquah's cross.

Rami headed Kaka's cross home from six yards to give Milan hope and Balotelli levelled from the penalty spot with 15 minutes remaining, after Riccardo Montolivo was fouled by Joel Obi.

Amauri back-heeled Parma back ahead just two minutes later, from Schelotto's cross, before Biabiany headed a fourth in injury time.