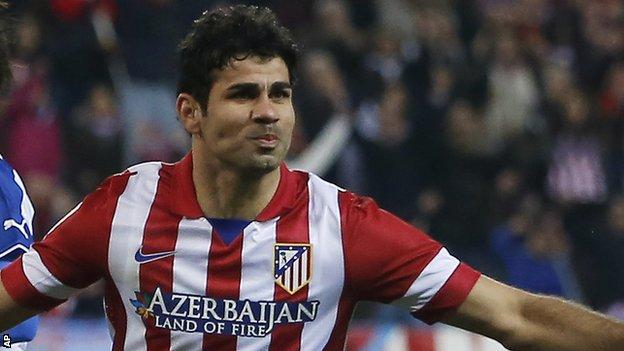 The World Cup is only 88 days away, with the opening match between host nation Brazil and Croatia taking place in Sao Paulo on 12 June.

BBC Sport, with the help of European football expert Andy Brassell, is taking a weekly look at happenings from across the world of football and what impact they could have on the tournament in the summer.

Andy Brassell: "Atletico Madrid centre forward Diego Costa shows no sign of losing form. The 25-year-old hit his 30th goal of the season (22 in La Liga) in Saturday's 1-0 win over Espanyol, which kept Diego Simeone's men on the title trail.

Diego Costa has scored in every Champions League game he has played this season. He has hit seven goals in five appearances in Europe's top club competition.

"It continued a fantastic week for the Brazilian-born forward, who also scored twice in the emphatic Champions League win over AC Milan, a week after finally making his debut for Spain in the friendly against Italy.

"Costa is a controversial figure, not just because of his decision to turn his back on the country of his birth, but because of his abrasive style. Some Spanish press reports ahead of the Italy game even suggested Real Madrid's Sergio Ramos had asked coach Vicente Del Bosque not to pick Costa.

"Ramos denied that, and the striker offers a powerful new option to Spain - probably at the expense of Chelsea's Fernando Torres, who faces an uphill task to make the 23."

Andy Brassell: "There's no such thing as a well-timed injury when preparing for the World Cup, but one senses that German magazine Kicker has a point when it says that Mesut Ozil's hamstring injury takes him 'out of the firing line, for now'.

"Much of the criticism aimed at Arsenal's £42.5m signing for his performance in Tuesday's Champions League exit at Bayern Munich was made without knowledge that he had suffered the injury in the very opening minutes of the match, though Kicker reflected elsewhere in its pages that the English press had made the Germany midfielder 'once more the whipping boy'.

"It has taken time for the media at home to fight Ozil's corner, with debate in recent weeks over whether one of the cornerstones of coach Joachim Low's side should be guaranteed his place. Despite collecting the 2013 Germany Supporters' Player of the Year award before the recent friendly against Chile and setting up the only goal for Mario Gotze, Kicker themselves said Ozil 'failed to convince'.

"Ozil's international team-mates have closed ranks around him, with former Manchester City defender Jerome Boateng calling criticism of him 'outrageous'. Boateng's Bayern colleagues Gotze and Toni Kroos have been suggested as possible replacements for Ozil in Die Nationalmannschaft, yet Kroos has shone recently in a deeper role and Gotze has looked good standing in for Franck Ribery on the left for Bayern. So Ozil's place should just about be safe."

Defoe at the double

Jermain Defoe enjoyed the perfect start to life in Major League Soccer with two goals on his debut in Toronto's 2-1 win at the Seattle Sounders.

The former Tottenham striker, who moved to Canada at the end of last month, still harbours hopes of being part of England's World Cup squad and gave boss Roy Hodgson a timely reminder of his goal-scoring talents.

"The most important thing is winning the game, but to score two goals in your debut is a dream," Defoe told the Toronto Sun. The 31-year-old had said he was sure Hodgson would be watching with interest.

Messi makes a mockery of doubters

"Messi's worst season for years," screamed the headline on the front page of Spanish newspaper Marca on Tuesday. Less than a week later, Lionel Messi is making the headline writer look rather foolish.

After running rings around Champions League opponents Manchester City on Wednesday, the Argentina star scored a clinical hat-trick in a 7-0 thumping of Osasuna on Sunday - taking his tally to 31 goals for the campaign. Messi returned from a two-month absence with a hamstring injury in January and is now, ominously for Argentina's World Cup rivals, starting to rediscover his best form.

England may not be fancied by many people in their own country ahead of this summer's World Cup, but Italy coach Cesare Prandelli believes the current team are an improvement on the side the Azzurri knocked out of Euro 2012.

Italy won the quarter-final in Kiev on penalties after a goalless 120 minutes, on their way to reaching the final which they lost 4-1 to Spain.

England face Prandelli's men in their opening World Cup match in Manaus on 14 June and the Italian boss says he thinks the emergence of Liverpool's Raheem Sterling, 19, and Daniel Sturridge, 24, and Everton's Ross Barkley, 20, will prompt Hodgson to move away from the defensive tactics on display in Ukraine.

"They have discovered new players, especially the wingers, and athletic players who run a lot," he told BBC World Service's World Football programme.

Spain and Real Madrid defender Alvaro Arbeloa faces a fight to be fit in time for Brazil after saying he expects to be out for up to two months with a knee injury.

The 31-year-old right-back injured his knee against Atletico Madrid on 2 March, but is remaining positive he will still play a part in the season finale for both club and country.

"Hopefully I make it back in time to play in the Champions League final if Madrid make it and the World Cup if I'm picked," said the ex-Liverpool defender.

Netherlands midfielder Kevin Strootman, 24, will miss the World Cup after tearing his cruciate ligament while playing for Italian side Roma in a 1-0 defeat by Napoli.

'Sky is the limit' for African football

Ghana Sports Minister Elvis Ankrah is confident the team will prepare in the right way for a successful World Cup, having reached quarter-finals in 2010 where they lost in penalties to Uruguay.

"The team is unified and I believe they will make Ghana and Africa proud," he told BBC Sport.

"The difference between the winner and the rest is simple: preparation and practice. There is no magic, there is not any weird formula - a little bit of luck comes into it but you create your own luck through preparation.

"It is possible for an African country to win the World Cup - the sky is the limit."

The 42,000-seater venue, in the city of Manaus which is situated in the heart of the Amazon rainforest, is the third World Cup stadium to open this year. The ribbons have also been cut at Estadio das Dunas in Natal, and the Estadio Beira-Rio in Porto Alegre.

"It's good news because it's pushing all the other stadiums to understand that the remaining three, they really have to come." said Fifa general secretary Jerome Valcke.

All quiet for Fifa at World Cup opener

Fifa has announced that there will be no speeches at the World Cup opening ceremony.

Last year, Brazilian President Dilma Rousseff was booed by fans at the opening match of the Confederations Cup - a curtain-raiser for the World Cup - following social unrest in the host nation.

Fifa president Sepp Blatter said he hoped this summer's tournament would play a part in calming down the protests. Protesters took to the streets of many Brazilian cities shortly before the Confederations Cup in June 2013, denouncing corruption and the perceived high cost of preparations for the World Cup.