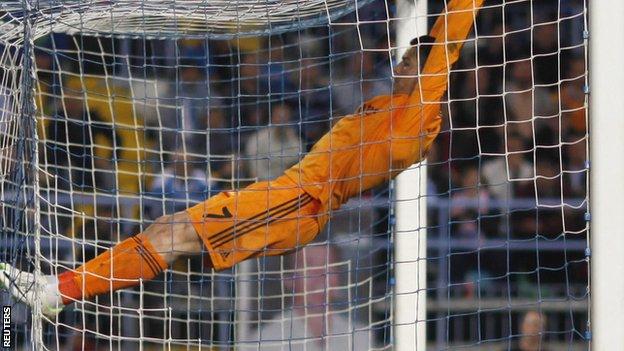 The Portuguese found space to shoot low into the net from inside the area as Real kept the pressure on their title rivals.

Carlo Ancelotti's men were not at their best but were rarely troubled by relegation-threatened Malaga.

Isco shot over for Real when through on goal in an uneventful second half.

Defending champions Barcelona are seven points behind Real but could reduce that deficit at home to Osasuna on Sunday.

Real have not been beaten since a 2-1 defeat at the Nou Camp in October, a run stretching 30 matches in all competitions.

They entertain Schalke in the Champions League last-16 second leg on Tuesday, leading 6-1 from the first match.

After a quiet start, Ronaldo settled any nerves from the visitors with an impressive strike to take his goal tally in all competitions to 39 for the season.

The former Manchester United man wriggled his way past a couple of Malaga defenders before firing clinically into the net from inside the area.

He almost doubled Real's lead soon after, having a shot blocked by the outstretched leg of Malaga goalkeeper Willy Caballero.

Real did suffer a blow before the break as France striker Karim Benzema limped off injured and they struggled to find their usual attacking rhythm.

Former Malaga midfielder Isco should have doubled the lead after the break but he shot over after being put clear on goal.