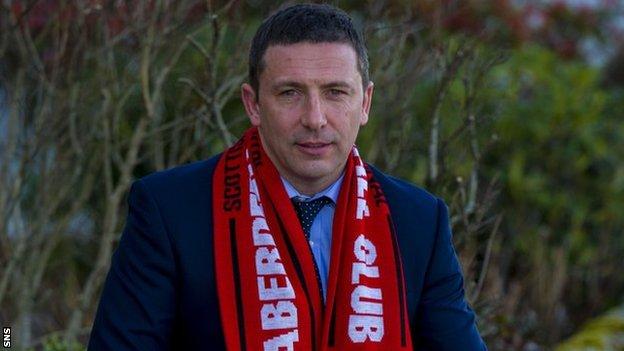 The new deals, until summer 2017, come as the pair prepare for Sunday's Scottish League Cup final.

McInnes said: "We both really enjoy working at the club, but we are only some way towards what we would like to achieve here.

"The additional contract allows us time to really plan for the future in terms of developing the squad."

McInnes and Docherty took over from Craig Brown and Archie Knox shortly before the end of last season.

The Dons presently sit second in the Scottish Premiership, have reached the Scottish Cup semi-finals and on Sunday have the chance to lift their first silverware since 1995 when they face Inverness Caledonian Thistle at Celtic Park.

"When Tony and I arrived at Pittodrie, we knew we would need time to transform it into our squad," McInnes told his club website.

"We have demonstrated this season that we are definitely heading in the right direction, but we're far from the finished article.

"It's great that the board also believes we are doing a decent job."

McInnes, who previously managed St Johnstone in Scotland's top flight, took over at Pittodrie after a he was sacked by Bristol City in January 2013 following a difficult spell in the Championship in England.

However, Aberdeen chairman Stewart Milne was delighted at how the 42-year-old has fared on his return to Scotland.

"It's fantastic that Derek and Tony are committing themselves for the long haul and I'm sure our supporters will be as pleased as everyone at the club is," he said.

"We were convinced from day one that they didn't see the task at the club as being anything other than a long-term project and, having our management team on long-term contracts in addition to an important nucleus of the playing squad on similar deals, bodes extremely well for the future.

"Derek and Tony have had a major impact on the club since taking over the reins.

"We are all delighted with the progress to date. But, as Derek keeps reminding us, we are very much at the start of a journey."