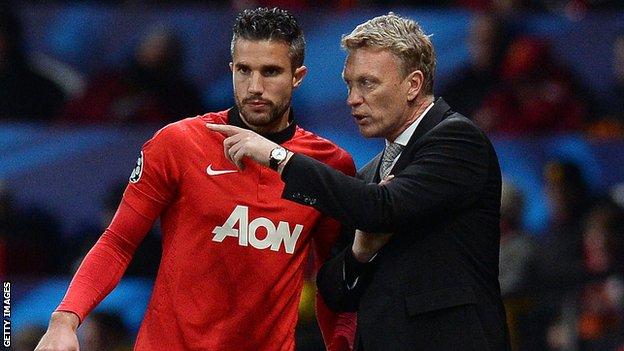 The 30-year-old has been dogged by claims he does not get on with manager David Moyes and it has even been suggested he may leave in the summer.

But the Netherlands international insists he is content at United.

I probably only see about 10% of what's written about me, but the things I have read recently aren't based on the truth

"The truth is I'm very happy here," he said. "I signed for four years and I'd be delighted to stay longer, beyond the next two years I have on my contract."

It has also been suggested that Van Persie has not been impressed by United's training methods under Moyes.

However, speaking in an interview conducted for the club's match programme, United Review, ahead of Sunday's encounter with old rivals Liverpool, he spoke in glowing terms about the manager.

"There is no doubt I'm learning new things and progressing with David Moyes," he said. "The sessions we have on the training ground are fantastic and I'm learning a lot from them every day.

"There is mutual respect between us and the work environment is actually good. He really wants things to work and I want the same."

Van Persie has admitted the huge amount of debate about his future is partly down to his limited public statements.

Comments he made about his own performance in the 2-0 defeat by Olympiakos earlier this month were interpreted as criticism of his manager's tactics.

Van Persie's body language when he was replaced at West Brom on Saturday did not impress either, especially given Baggies boss Pepe Mel was not alone in believing the forward was fortunate to avoid a red card.

Ajax assistant-manager Ronald de Boer has also claimed Van Persie would leave this summer if he did not feel United were doing enough to strengthen the squad.

"You can count my interviews this season on one hand, so maybe when I do speak people want to turn it into something sensational," he said. 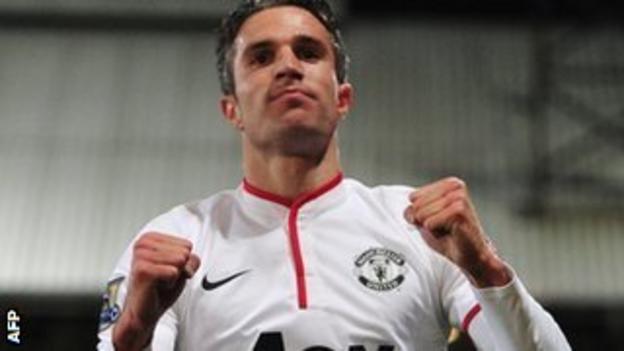 "I don't mind if my performances get dissected and people criticise what I've done on the pitch. A lot of those opinions and criticisms may actually be right.

"What I need to address are the situations when people are taking it upon themselves to think for me, make assumptions, or interpret things as if they are me. Last time I checked my head was still attached to my body. I'm the only one who knows exactly what I'm feeling.

"I probably only see about 10% of what's written about me, but the things I have read recently aren't based on the truth.

"Talk about a tackle that was too late. I don't mind. But it goes too far when people start suggesting, amongst other things, that I have a bad understanding with the manager. That's not true at all."

Van Persie insists his comments are delivered with a real understanding of Moyes' approach.

"Over the last few years, I've started to look more closely at the way coaches work," he said.

"I've taken a real interest in all the methods they use. I can tell you Moyes' sessions and the things he says in his team meetings are spot-on.

"I really enjoy working under him and I'm absolutely convinced things will pick up and we'll turn it around."