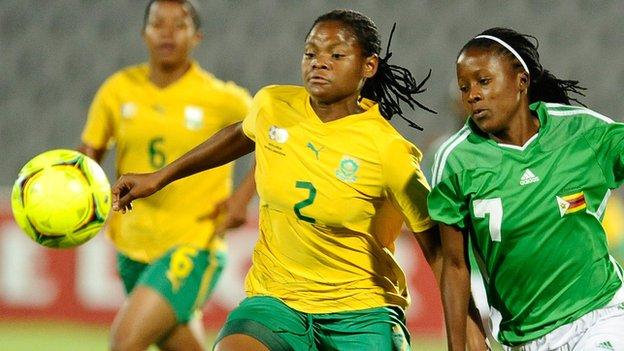 South Africa will bid to host the 2019 Women's World Cup as they turn their search for success from their failing men's side to the women's arena.

The country has already won the right to host the 2016 U-20 Women's World Cup - the first time a major women's world championship will be hosted on the African continent - and now want the senior event as well.

They are expected to face stiff face competition, however, notably from reigning world champions Japan.

We will aim high and look to make huge strides

Jordaan also announced the appointment of former Dutch international Vera Pauw as the new coach of the women's side, Banyana Banyana.

She has been tasked with qualifying the team for the 2015 Women's World Cup in Canada, where Africa will have three representatives.

South Africa have previously narrowly missed out on World Cup qualification but did take part in the women's competition at the 2012 London Olympics.

Qualification will be decided in October at the African Women's Championships in Namibia.

Pauw has worked extensively with the Dutch federation plus also in Scotland and mostly recently Russia. She is also a Fifa instructor.

"We decided we wanted first a women coach for each of our women's teams, then we wanted one of the best coaches and we when couldn't find that internally we had to go outside and look. Pauw comes with top credentials," Jordaan said.

"Her mandate will be to take us to the World Cup next year. Her contract will be for as long as she is successful."

Pauw was not at Thursday's announcement in Johannesburg but in a recorded video message she said: "We will aim high and look to make huge strides."

She will arrive later this month and takes charge of her first match on 26 March against Namibia in a friendly.