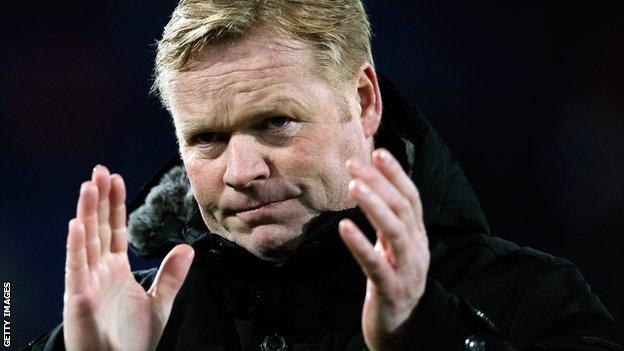 Feyenoord boss Ronald Koeman is interested in managing Swansea City according to his agent, Guido Albers.

Koeman, the 50-year-old former Netherlands defender, announced in February he will leave the Dutch club at the end of the season.

"If he gets the chance to be the new manager of Swansea then he's willing to," Albers told Radio Wales Sport.

However, a senior source at Swansea says the Premier League club are not interested in speaking to Koeman.

Garry Monk was appointed head coach at the Liberty Stadium for the "forseeable future" following the departure of Michael Laudrup.

But Albers confirmed he has approached the Welsh club on Koeman's behalf.

Albers says he got in touch with Swansea's Netherlands-based director John van Zweden, who advised him who to contact at the Welsh club.

He said he sent an email to chairman Huw Jenkins and vice-chairman Leigh Dineen regarding Koeman, but has had no response.

"One of his [Koeman] wishes is to work in the Premier League," said Albers.

"Swansea's a fantastic club and a club with a lot of potential on the pitch.

"He's able to get success for the club. If you see all those fantastic players at Swansea perhaps he can find a touch in which he can take Swansea to a higher level."

Koeman helped the Rotterdam-based Feyenoord to second place in the Eredivisie in his first season, and followed that up with a third-placed finish. They are currently fourth in the Dutch League.

He has also managed PSV Eindhoven, Valencia, Benfica and was assistant at Barcelona.

As a player he won the European Championship in 1988 with the Netherlands.

Albers says there has been a lot of interest in Koeman's services since he announced he was leaving Feyenoord and urged Swansea to get in touch.

"If they are really interested come back to me," said Albers.

"But I can't call them everyday. Since the time he announced he is leaving Feyenoord already 25 agents have called me."