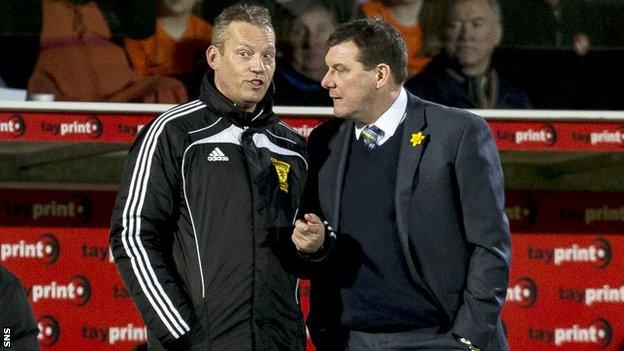 Stevie May's goal settled a fiery clash, with both bosses being sent to the stand by referee Crawford Allan after a furious bust-up.

"Some things were said that shouldn't have been said by Jackie about my team," Wright told BBC Radio Scotland.

"I'll respond to that because it's totally out of order. A cheap shot."

I get on well with all his staff but that's out of order tonight and it's a cheap shot.

United felt certain decisions went against them during the game, with Farid El Alagui and Gary Mackay-Steven both denied penalties.

Wright confronted McNamara on the touchline, leading to both men being ordered out of the technical area in the second-half.

"I'll defend my players to the hilt," said the St Johnstone manager. "I'm always respectful of other teams and how they play.

"He shouldn't be making comments on how he thinks we're playing.

"Maybe I should have kept quiet, but it's my team, my players and, when somebody doesn't show them any respect and makes cheap comments, I'll respond to that.

"He can come on and deny it if he wants. I know what he said - he said the same in the first half.

"I get on well with all his staff, but that's out of order tonight and it's a cheap shot.

"I respect people and I'll move on from it, but I do feel that Jackie should have showed my team a lot more respect."

Simon Donnelly was sent out to carry out United's post-match media duties and the assistant manager said McNamara was entitled to stand up for his team.

"We felt a few decisions went against us tonight," said Donnelly. "On the back of the good run we've been on, coming into the game looking forward to it, we're obviously disappointed with the outcome.

"If you look at any touchline week in week out, things are said, so he's obviously taken exception to whatever's been said at the time.

"I know Jackie as a person and a manager and he's very respectful to all the opposition and he's on the touchline defending his team as well.

"There were a couple of tackles tonight on Ryan Gauld and such like that went unpunished, so we want to reserve the right to defend our team as well."

Donnelly admitted that his team's performance had dipped after five straight victories, while Wright thought his side had put in "a tremendous performance".