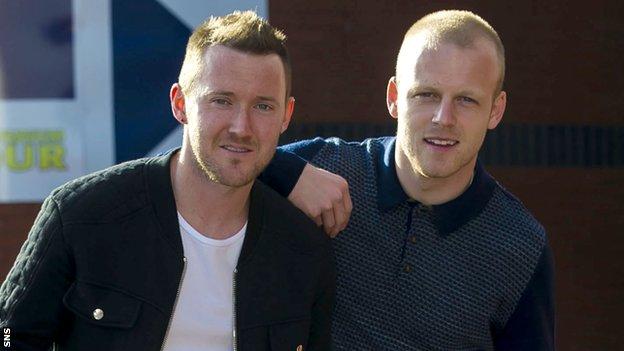 Ally McCoist's men needed a late goal from Bilel Mohsni to take the Scottish League Two side to a replay.

"I think it is unfair on Albion Rovers to call it an embarrassing result," said Naismith.

"It is a disappointing result for a club like Rangers, but it happens all the time."

It is still a squad in transition, so I don't think there will be too much criticism overall.

The Everton and Scotland forward agreed with McCoist's assessment that there was no shame in being held by the part-timers, but admitted Rangers will have to raise their standards for the replay at Hamilton Academical's New Douglas Park on Monday 17 March.

He said: "At a club like Rangers, there's always going to be criticism if your performances are not as good as expected.

"It is about being able to handle the pressure of playing in front of those crowds and the expectations.

"People forget that it is a fairly new squad from 18 months ago. There has been a lot of change and the main thing is the results.

"It is still a squad in transition, so I don't think there will be too much criticism overall.

"I am sure the people at Rangers and the fans will think it's not good enough, but they've got a second chance at it.

"When I was at Rangers and had some bad results and were still in the Cup, it was a warning and you generally found that we would go into the replay and put in a performance that merited playing for Rangers.

"For players at part-time teams, it is a cup final, it is a massive step and you have to consider the teams Albion Rovers beat in previous rounds.

"I am sure Rangers will rectify that."

A win on Wednesday against Airdrieonians will clinch the League One title, and Naismith suggests it could be a springboard for success in the Scottish Cup, with a semi-final clash at Ibrox against Dundee United waiting should they get past Rovers.

"Everybody will have expected them to do it and taken it for granted, but the players have still got to go out there and do it," added Naismith.

"It is an achievement. I'm sure in years to come there will be greater achievements, but it's a step in front of them they need to take and they've answered that question.

"They will believe they can win it if they get into the semi-finals, but you've got three very good teams this season who have performed consistently well.