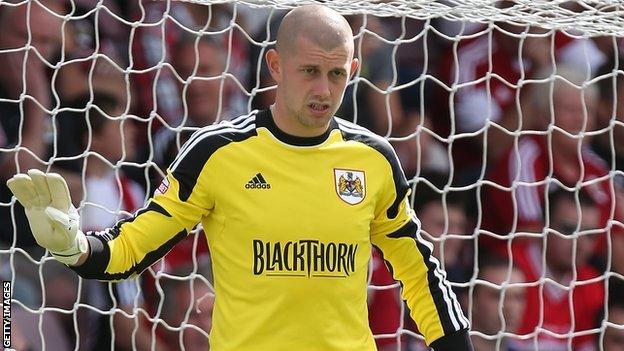 Fielding regained the number one jersey at the start of the month, having been dropped by former boss Sean O'Driscoll.

And the 25-year-old produced several saves to deny play-off chasing Posh a share of the points, despite City playing for 70 minutes with 10 men following Adam El-Abd's red card.

Three in a row

"I think I did prove myself," he told BBC Radio Bristol.

"It's been a bit frustrating personally, being in and out of the team, and I haven't been able to show people what I'm capable of.

"There's nothing like getting respect off your manager and team-mates and that's been the most pleasing thing."

Fielding was signed by O'Driscoll in the summer on a three-year deal for an undisclosed fee from Derby, where he had dropped out of the team.

The former Blackburn keeper started the season as first-choice but was soon replaced by Elliott Parish, with City looking to escape the League One drop-zone.

O'Driscoll was dismissed in December, and successor Steve Cotterill rotated the squad once again; he sent Parish out on loan to Newport and brought in Simon Moore from Cardiff on loan until the end of the season.

But after Moore suffered a groin injury, Fielding was recalled and has kept his place for City's last three games, in which they have picked up maximum points and moved up to 15th in the table.

Cotterill has been vocal in his praise for Fielding's attitude, and said he had been "supportive" of his team choices.

When asked how he had coped with the ups and downs of the season, the keeper said: "My missus had a little girl three weeks ago and so I've had that to look forward to.

"Obviously this season's been difficult and challenging but it can only make me stronger.

"It's a happy place to be at the moment and long may it continue."