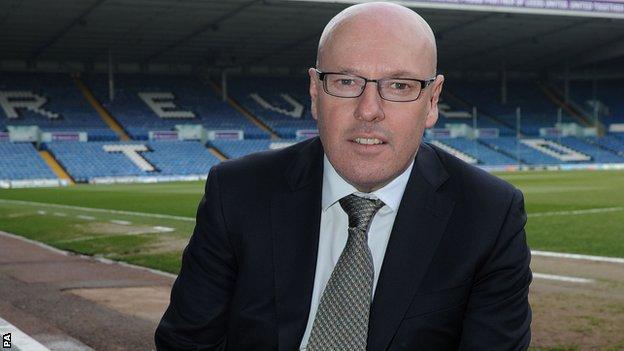 Leeds United manager Brian McDermott has called for some stability at the Championship club and says their off-field problems are affecting results.

At the end of January, McDermott was told he would be sacked by United's prospective new owner Massimo Cellino, but then reinstated as boss days later.

Leeds have not won in five games, and lost 4-2 at home to Reading on Tuesday.

"We would love to get some stability at the club so we can move forward," said 52-year-old McDermott.

Last week, it was revealed that Cellino's proposed takeover of the club could collapse as he will face a tax evasion court case in Sardinia later this month.

However, if he was found guilty, the Football League's "fit and proper persons test" would almost certainly bar him from completing his purchase of 75% of the club.

"Uncertainty over the future ownership has been dragging on for such a long time that there is apprehension around the place and the main conversation is about the ownership," added McDermott.

"I know it is a results business but we have had no stability here for a long time. Obviously it would help if the manager knew who the owner was going to be."

Leeds, who lost 5-1 at home to Bolton on Saturday, fell 4-0 behind to McDermott's former side Reading after 54 minutes, although goals from Matt Smith and Rodolph Austin gave the scoreline some respectability.

McDermott became manager of the Elland Road side in April, but they have now only won twice in their last 15 games.

"Leeds have had a lot of managers in the last 10 or 11 years. I want to try to break that cycle," said McDermott.

Meanwhile, Leeds have confirmed that managing director David Haigh has left his position with current owners GFH to concentrate solely on his role with the club.