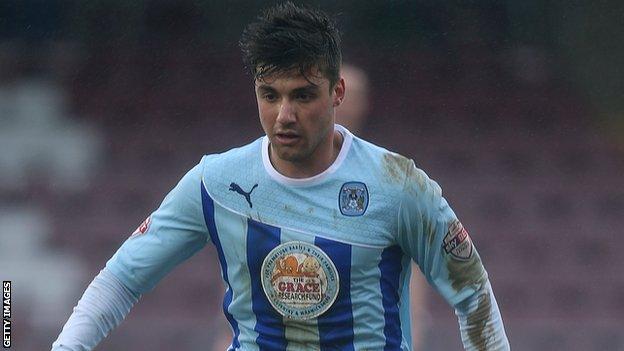 Teenage winger Michael Petrasso says he would like to extend his loan at Coventry City from QPR until the end of the season.

The 18-year-old signed for the Sky Blues on a 28-day loan in February and is set to feature in his last game of that spell against Gillingham on Tuesday.

"If the decision was mine, I'd stay," he told BBC Coventry and Warwickshire.

"QPR and Coventry have to want me to stay and I have to wait and see if both clubs can come to a decision."

The Canadian made his Sky Blues debut in their 2-1 defeat by Carlisle on 18 February and scored his first goal in the following match - a 3-1 loss at Tranmere.

Prior to joining Coventry, Petrasso had a two-month loan spell with Oldham, where he scored once in 15 appearances.

The Sky Blues, who began the season with a 10-point deduction, are currently six points clear of the relegation zone in League One with 12 games of the campaign remaining.