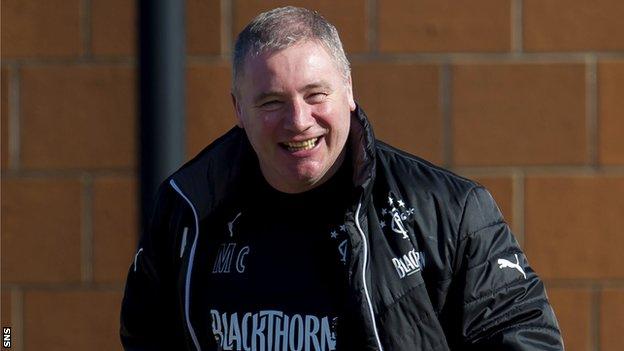 Rangers manager Ally McCoist is solely focused on winning the League One title by beating Airdrieonians on Wednesday, and says he does not fear for his job.

McCoist was criticised by the media - and some supporters - for saying Sunday's 1-1 Scottish Cup draw at home to Albion Rovers was not embarrassing.

Asked if he feared for his job, the former Gers striker said: "No, I don't.

"I will continue in our quest to get the team back to where we belong and hopefully playing some good football."

McCoist's comments came as Rangers announced they have ended their relationship with the Media House International Ltd public relations firm "by mutual consent", with chief executive Graham Wallace in the midst of a 120-day cost-cutting review.

The headlines since Sunday's stalemate - which League Two part-timers Albion were leading until the final 15 minutes - have not been kind to McCoist.

What we have is a fantastic squad of boys who are doing their best for the club, but they are maybe being judged along with the Rangers greats

But the former Scotland international stressed some critics were being unrealistic in comparing the side he has built since Rangers' financial meltdown with teams of the past that included the likes of Paul Gascoigne and Brian Laudrup.

"I can totally understand the frustrations," he said. "The fans are 100% entitled to their views and opinions.

"The fans have expectations of Rangers teams and all the boys know what is expected of them.

"I possibly believe there's a lack of understanding in the respect a lot of people are probably judging the club and the team in the same way as they have done for 100 years.

"What we have is a fantastic squad of boys who are doing their best for the club, but they are maybe being judged along with the Rangers greats.

"I don't think that's possibly the right thing to do at the moment."

McCoist, whose team lead League One by 23 points, also explained his assessment of Sunday's game.

"I just think, if you use the word 'embarrassment', it's disrespectful to the opposition," he said.

"We absolutely know our jobs and we are very disappointed we didn't manage to beat Albion.

"From our point of view, it wasn't a good enough result. We're not shirking away from that one bit and we deserve the criticism which goes with not winning."