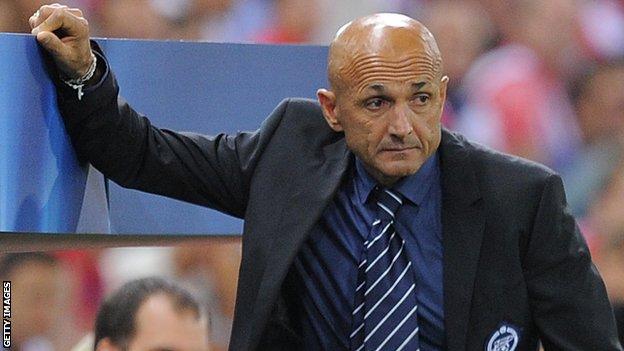 Italian Spalletti, 55, joined the club in December 2009 and won two Russian Premier League titles as well as the Russian Cup and the Russian Super Cup.

But Zenit dropped to second in the league at the weekend and lost 4-2 in the first leg of their Champions League last-16 tie against Borussia Dortmund.

The team, who are owned by state-controlled gas company Gazprom, have only won one of their last 11 competitive games - a run stretching back to October because of the Russian winter break, which only ended at the weekend.

Spalletti has also managed Italian clubs Empoli, Sampdoria, Venezia, Udinese, Ancona and Roma and made a number of expensive signings during his time at Zenit.

In September 2012, he bought Brazilian striker Hulk from Porto and Belgian midfielder Axel Witsel from Benfica for a combined total of £64m.

Spalletti was the first coach to lead Zenit into the knockout stages of the Champions League, but they lost 4-3 on aggregate in the last-16 against Benfica in 2011-12.

The Russian club will exit the competition at the same phase this year, unless they beat Dortmund in Germany by a three-goal margin in the second leg on 19 March.