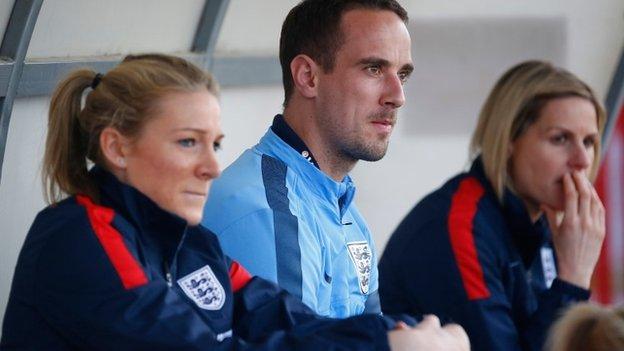 England can "send a message to the world" by beating France on Wednesday and retaining the Cyprus Cup, says midfielder Fara Williams.

The Three Lionesses reached the final by defeating Canada 2-0 on Monday and had a 100% record in the group stage.

"With the mindset that Mark's trying to get into us we'll go into this final very positively and with an attacking game plan," she said.

That defeat saw the Three Lionesses eliminated from the tournament, and Hope Powell was sacked as head coach the following month after 15 years in charge.

"Tactically in the game against them at Euro 2013 we weren't right. Nobody knew the system, nobody knew how to play it and France murdered us," Williams admitted.

England have failed to win in 40 years and 14 matches against France, but Williams, who is set to win her 125th cap in Wednesday's final in Nicosia, is convinced that barren run can be ended.

"With the confidence we've now got as a team and the belief we have in each other as players, we can beat France and send out a message to the world," she said.

The Cyprus Cup has been running since 2008 and is an invitational tournament made up of 12 teams which is held in Cyprus. Teams compete in a group stage to reach the final. England have won it twice, including last year when they beat Canada 1-0 in the final.

Scotland are aiming for their best-ever finish at the tournament by beating South Korea in the match for third place.

The Scots were unbeaten in the group stage against higher ranked opponents France, the Netherlands and Australia, but failed to make the final on goal difference.

Head coach Anna Signeul is focusing on the positives ahead of the third-place play-off against the Koreans.

"We have played England twice here in the last few years, so it's good that we are playing different opposition on the last day," she said.

"We finished as the best group runners-up in the tournament and the only team with a better record was England, so we have done really well.

"South Korea are another team who are higher than us in the rankings, so it will be another good test and a chance for us to go on continuing our improvement."