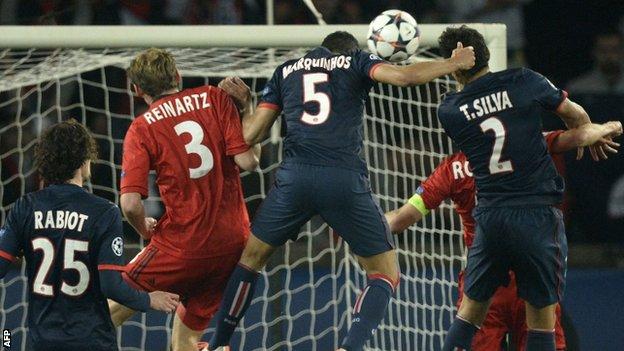 Paris St-Germain reached the quarter-finals of the Champions League for the second successive season after beating 10-man Bayer Leverkusen.

Trailing 4-0 from the first leg, Leverkusen led through Sidney Sam.

Marquinhos's header levelled for PSG and Leverkusen's Simon Rolfes had a penalty saved.

Ezequiel Lavezzi gave the hosts the lead from 14 yards, before Emre Can received a second booking for diving, as PSG won 6-1 on aggregate.

The French champions were beaten by Barcelona in the last eight last season but are unbeaten at home in European competition since 2006.

In Sweden striker Zlatan Ibrahimovic, they also have one of Europe's most feared strikers, although he failed to add to his 39 goals from his previous 32 appearances in all competitions this season.

Leverkusen have not reached the quarter-final of the Champions League since finishing runners-up in 2002.

Sami Hyypia's men had lost eight of their 11 matches since the end of the group stages of the competition.

In contrast, PSG, who have never won European football's top club prize, went into the match on the back of five straight wins.

Leverkusen made a bold start, with Sam heading home the opener from Giulio Donati's cross after six minutes, but Marquinhos levelled seven minutes later with a header from a corner.

Leverkusen could have retaken the lead when they were awarded a penalty after Eren Derdiyok's shirt was pulled by Christophe Jallet, but Salvatore Sirigu comfortable saved from Rolfes,

Lavezzi's first-time strike from Lucas Digne's cross then put PSG in front on 53 minutes before Can was sent off on 68 minutes..

Leverkusen's last foray into the knockout rounds in 2011-12 ended with a 10-2 aggregate defeat by Barcelona.