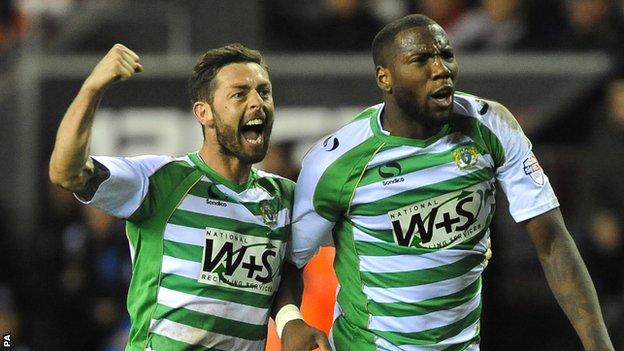 Luke Ayling bundled in a last-minute equaliser as relegation-threatened Yeovil denied Wigan a ninth straight win in an action-packed finish.

Wigan's Jordi Gomez had a first-half penalty saved before Nick Powell gave them the lead.

There then followed five goals in the final eight minutes, as Ishmael Miller struck twice to put Yeovil in front.

James McArthur equalised and a Byron Webster own goal put Wigan ahead, but Ayling turned in from a corner.

Wales midfielder Jack Collison, who has joined the Latics on loan from West Ham for the rest of the season, watched from the stand as his new team-mates attempted to consolidate a play-off place.

Wigan boss Uwe Rosler was meeting Yeovil for the first time since they denied his Brentford side a place in the Championship by winning last May's League One play-off final.

His new side passed up a chance to take a half-time lead when Gomez was unsuccessful from the penalty spot.

The midfielder was given his opportunity in the 25th minute when Powell was pushed down by Yeovil defender Matteo Lanzoni but Marek Stech dived to his left to push away Gomez's penalty.

Callum McManaman then fired a shot at Stech and Nicky Maynard drilled an effort wide, but Wigan did go ahead 11 minutes after the break.

Top scorer Powell, starting a match for the first time since 28 January after recovering from a hamstring injury, nodded in his 11th goal of the season from three yards after McManaman's cross had been steered towards the back post by McArthur.

But the bulk of the drama came in an astonishing finish to the match.

And he struck again three minutes later with a precise finish inside Al Habsi's far post - running the length of the pitch to celebrate.

But Wigan equalised within seconds, as McArthur slotted in Jean Beausejour's cross from the left.

And another cross from the Chile international looked to have won the game for Rosler's side, as Yeovil defender Webster diverted the ball into his own net.

The visitors, though were not finished, and gained a point in their battle against the drop as Stech went forward to cause confusion from Tom Lawrence's corner and defender Ayling turned the ball in from almost on the line.

Wigan manager Uwe Rosler: "At some point our run had to come to an end and sometimes you have to take what you get. We didn't deserve to win.

"Overall, Yeovil were very resilient, they bombarded us with long balls and we couldn't win the first header.

"I am not here to blame individuals. We gave all we had, we were down on our knees in the last 10 minutes. I have massive respect for the players. The run we had... it had to end at some point."

Yeovil Town manager Gary Johnson: "I enjoyed that one. I have come up against Uwe Rosler four times and I have got three wins and a draw.

"We have never felt we were down.

"We feel we are in the race to stay up and we need to keeping getting results. We know Wigan are effectively a Premier League side and we held them well."