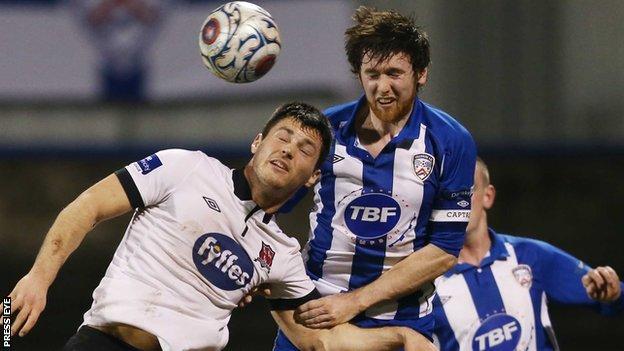 The Irish Premiership looks set to have no representation in the Setanta Sports Cup semi-finals after Coleraine, Crusaders and Ballinamallard United lost their two-leg quarter-final ties.

Coleraine led Dundalk 3-2 after the first leg but Pat Hoban scored on 51 minutes and Stephen O'Donnell fired home a dramatic second in injury-time.

Ballinamallard lost 5-0 at St Patrick's Athletic, making it 6-0 on aggregate.

Crusaders went down 5-0 at Sligo Rovers for a thumping 9-1 aggregate scoreline.

Glentoran lost 5-1 to Shamrock Rovers in the first leg of their tie two weeks ago, a deficit they will find very difficult to overturn at the Oval next Monday night.

Linfield and Cliftonville, who are currently vying for the Premiership title, both opted not to compete in this year's competition.

Coleraine began their game brightly at Ballycastle Road, but Stephen Kenny's League of Ireland runners-up took the lead when Hoban tucked the ball past Eugene Ferry from three yards out.

There was late heartache for the Bannsiders when man-of-the-match O'Donnell shot into the corner from just outside the box for his first goal in the competition.

Trailing 4-1 to Sligo Rovers after the first leg at Seaview, Crusaders were 3-0 down at half-time in the second leg thanks to goals from Evan McMillan and Danny North (2).

Ross Gaynor and Liam Flatley got on the scoresheet for the FAI Cup winners after the break to complete a miserable Setanta Cup experience for the 2012 tournament winners.

Ballinamallard's 1-0 deficit after the first leg offered them some prospect of progression, but their hopes quickly faded as Mark Quigley and Conan Byrne (2) found the net to leave the half-time scoreline at Richmond Park 3-0.

Quigley and Daryl Kavanagh were on target for the Premier Division champions in the second half to complete the rout.