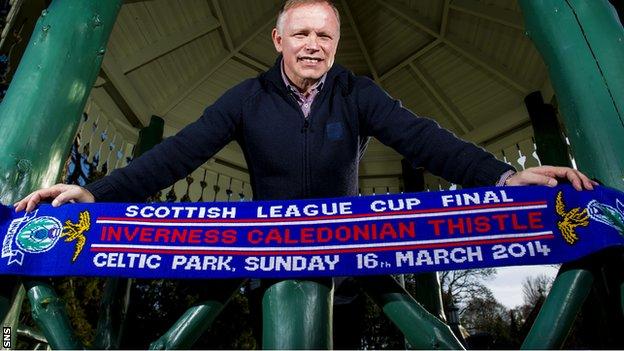 John Hughes has told his Inverness CT players that Wednesday's game against Hibs is their opportunity to impress ahead of the Scottish League Cup final.

The Highlanders have stumbled to two successive 5-0 defeats ahead of Sunday's final against Aberdeen.

"There are three or four places up for grabs so hopefully we get some real good performances and win the match," said Hughes.

"It gives everyone a chance to impress so they get that starting spot."

A man of the match performance against Hibs and then, who knows, they might be in my starting XI on cup final day

And Inverness aim to arrest their mini slump at home to Hibs.

"I feel we need it after the bitter disappointment of the Scottish Cup," said Hughes.

"I hope that we can get back to winning ways against Hibs and we're working our way towards the cup final.

"A man of the match performance against Hibs and then, who knows, they might be in my starting XI on cup final day."

His side will be without the suspended Greg Tansey and Marley Watkins against Hibs after both were sent off on Sunday for challenges on United midfielder Paul Paton.

Hughes did not believe either red card was merited but unsuccessful appeals would rule them out of Sunday's final at Celtic Park.

"We just have to pick ourselves up and get on with it but it would be nice to get a bit of clarity on it," said the Inverness boss.

Defender Gary Warren, who will miss the final through suspension, believes his side's current dip of form is "a minor blip".

"Obviously, conceding 10 goals in two games is disappointing for us. But the strength of character we've got in the squad, we'll pick ourselves up for the weekend.

"We've had a very good defensive record this season. If you look outside of Celtic, I think we're up there with Aberdeen as having the best defensive records in the league.

"It's just about finding that little bit of consistency again where we can go on a run.

"The cup final is massive for the club. If you look at the size of Inverness and what we've achieved last season and this season, to cap it off with winning a final would be brilliant.

"I picked up a red card in the semi-final. I'll make the journey down with the boys on the bus and try to give them as much support as I can, not on the pitch but from the sidelines."