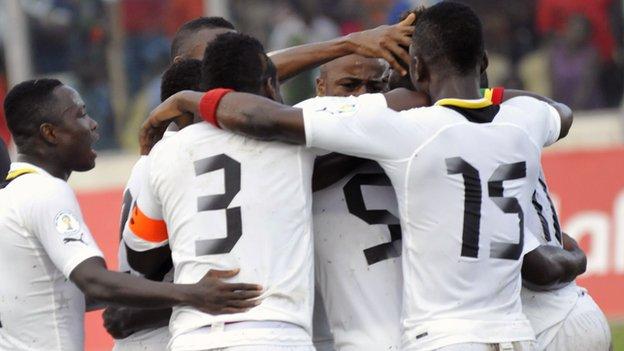 Ghana Sports Minister Elvis Ankrah is confident the team will prepare in the right way for a successful World Cup.

The Black Stars reached the quarter-finals in 2010, where they lost in penalties to Uruguay, and are tipped to do well in Brazil this summer.

Ankrah told BBC Sport: "Preparation determines everything and the players know what is at stake -they are ready to bring honour to the country.

"The team is unified and I believe they will make Ghana and Africa proud."

Kwesi Appiah's side were emphatic 7-3 aggregate winners over Egypt in the African play-offs to reach Brazil and many are expecting the team to make a big impact at the finals.

But they face a difficult task to emerge from Group G, having been drawn against Germany, Portugal and United States.

Ankrah, though, believes Ghana's fate lies in their own hands and insists the determining factor in whether they are successful will be the the work they put in before the tournament begins.

"We are doing everything possible to ensure that the team is in good shape," he said. "We will camp in Holland and the USA, play four friendlies and then proceed to Brazil. Everything is on course, the spirit of the team is very high.

"I believe that the message has got through to every player, the technical team and the Football Association.

"A lot of people are looking to Ghana as representatives of the continent. A lot will depend upon the effort an input we put into the preparation. Through hard work, sacrifice and input we will get results."

One issue that might derail Ghana is the persistent rumour that the FA is planning to appoint a foreign technical director to assist Appiah at the finals - a scenario that would unsettle and undermine the coach.

Ankrah said he had only "heard it and also read it in the papers - so I cannot confirm or deny it" and added that "I need to be properly briefed before I can make any comment on that".

However, he is adamant that Ghana are completely behind Appiah.

"We have a Ghanaian coach - an African coach - in Kwesi Appiah and we have confidence in him" he said.

"We have stated that we are ready to give him all necessary support, the best in the world, for him to be able to deliver. So in principle that is our position, that we will offer him all he needs technically, tactically and financially, to ensure he delivers."

He added: "The difference between the winner and the rest is simple: preparation and practice. There is no magic, there is not any weird formula - a little bit of luck comes into it but you create your own luck through preparation.

"It is possible for an African country to win the World Cup - the sky is the limit."