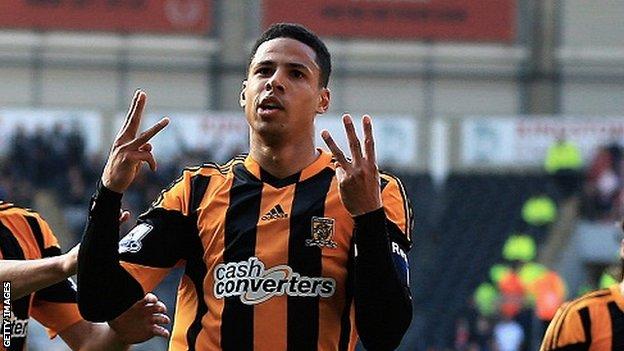 Hull City's players appreciate the importance of what they have achieved in the FA Cup, according to goal-scoring centre-half Curtis Davies.

Beating Sunderland 3-0 saw the Tigers qualify for just a second semi-final in their 110-year history.

Few current supporters were alive when Hull previously reached the last four, losing to Arsenal in 1930.

"The history does register with the players, we know it's a massive achievement," said Davies.

A pitch invasion at the final whistle showed what it meant to supporters - though many displayed 'City Till We Die' scarves and banners to remind club owner Assam Allam that they remain adamantly opposed to his plans to change the club's name to Hull Tigers.

I can't say I was expecting the pitch invasion, but it shows how much it meant to the fans, and the players are aware of that

With Wigan knocking out Manchester City, Hull, who will meet League One Sheffield United in the semi-finals, are now second-favourites to lift the trophy.

Davies told BBC Radio Humberside: "When the draw was made we all let out a bit of a cheer but I'm guessing Sheffield United will have done exactly the same, not through disrespect, but because we probably saw each other as the easiest route to the final before Wigan knocked out Manchester City.

"Getting the right draw is obviously helpful, but it's more about the right attitude going into games. As far as we're concerned, what would be better than finishing the season staying up and getting an FA Cup winner's medal?"

Playing at Wembley will be a first for the 28-year-old Davies, who scored the opening goal against Sunderland and has now scored three goals in three games,

"I've missed out through injury or not being picked in the past, so I need to stay fit and keep playing well to stay in the team," he added.

"When we saw the team Sunderland had put out, obviously it was a weakened side and we knew we would have a greater chance of winning the game, but at the same time we had to approach the game right.

"I always seem to score in spurts, so hopefully it will continue. I can't say I was expecting the pitch invasion, but it shows how much it meant to the fans, and the players are aware of that.

"We're not satisfied though, we want to go one better and get to the final and then go on and win it."