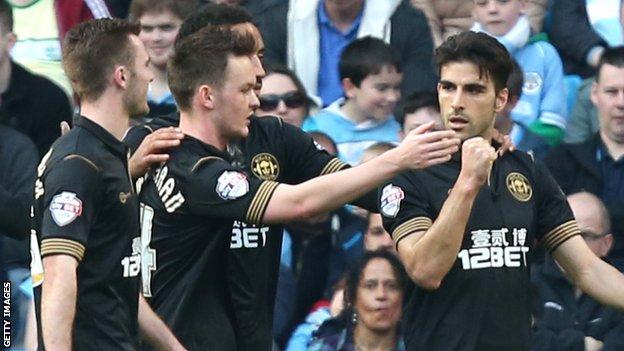 FA Cup holders Wigan Athletic will face Arsenal in the last four after ending Manchester City's hopes of a quadruple.

Wigan, who beat Manchester City to win the FA Cup last season, won 2-1 at the Etihad Stadium on Sunday.

League One side Sheffield United will face Hull City in the other semi-final, both of which will be at Wembley.

Nigel Clough's Blades - the first third-tier side to reach the semi-finals since Wycombe Wanderers in 2001 - will face their former manager Steve Bruce, now in charge at Hull.

Clough, a losing finalist as a player with Nottingham Forest in 1991, is looking to guide Sheffield United to their first FA Cup final since 1936, when they lost to Arsenal in the final.

They secured their place in the last four by defeating Charlton Athletic 2-0 at Bramall Lane on Sunday.

Hull, in the FA Cup semi-finals for the first time since 1930 after beating Sunderland 3-0, have never reached the final.

Their boss Bruce, who managed Sheffield United between July 1998 and May 1999, said he was delighted with the draw.

"Sheffield United gave me my chance in management a long, long time ago," he said.

"I'm delighted for everyone. I've seen the scenes at Bramall Lane today and now we've got a big Yorkshire derby to look forward to at Wembley, which will be a magnificent occasion for everyone."

Arsenal, without a trophy since they last won the FA Cup in 2005, won a place in the last four by beating Everton 4-1 on Saturday.

Arsene Wenger's side were last in the semi-finals in 2009, when they lost to Chelsea.

Wigan boss Uwe Rosler was excited about the chance to pit himself against Wenger, saying: "When you ask a young manager who wants to climb the ladder if they want a chance to play against Arsenal at Wembley, then of course you would take that."

The semi-finals will be played at Wembley on 12 and 13 April.