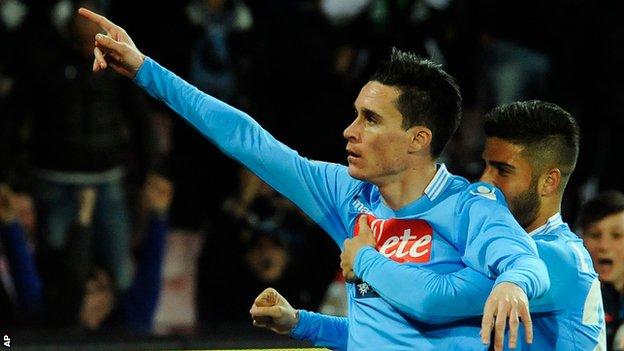 The match looked destined to be a goalless draw until Spanish forward Jose Callejon headed in a late winner.

Roma had carried the greater attacking threat in the first half, with Gervinho spurning two glorious chances.

But third-placed Napoli grew into the game after the break and Callejon's goal put them three points behind Roma.

Only the top two sides in Serie A automatically qualify for the following season's Champions League, with the third-placed team facing a two-legged qualifying tie to reach the group stage.

Jose Callejon has scored 10 goals in 27 appearances since joining Napoli from Real Madrid in a £8.3m (€10m) move last summer.

And it appears to be a two-way battle between Rafael Benitez's side and Roma for second place behind runaway leaders Juventus.

The visitors needed a win to keep their slim hopes of overhauling Juve alive and only Napoli keeper Pepe Reina's double save from ex-Arsenal forward Gervinho stopped the Giallorossi from going ahead before half-time.

The on-loan Liverpool keeper also blocked Roma right-back Maicon's deflected shot with a smart reaction save after the break.

But Rudi Garcia's men are now 14 points adrift of Juve after Callejon's far-post header, from Faouzi Ghoulam's left-wing cross, condemned them to only a second league defeat of the season.