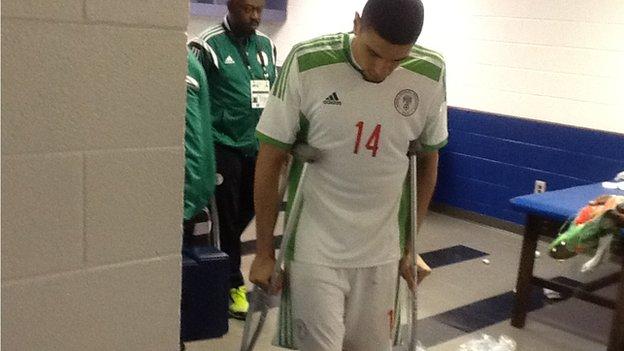 Leon Balogun's hopes of playing for Nigeria at the World Cup in Brazil have been boosted as scans have revealed no surgery is required on his right foot.

The Fortuna Dusseldorf defender's international debut against Mexico on Wednesday was cut short under five minutes after he collided with an advertising board and he was substituted in the 65th minute of the 0-0 daw.

"They told me that the two bones broken are in the base of my foot, which will heal on their own and will not require me to undergo any surgical operation," he was quoted as saying in a Super Eagles press statement.

"I was also told that within six weeks I should be in good condition and another two or four weeks for rehabilitation.

"Overall I should be back kicking the ball by the time the national team returns to camp."

Balogun also revealed he has commenced treatment and will be out for at least ten weeks. He says he has been in touch with the Nigerian medics and team officials.

"I have been in touch with Dr Ibrahim Gyaran, team administrator, Dayo Enebi and I must say I am totally overwhelmed by the show of love by Nigerians and fans across the world.

"I remain committed to overcome this initial setback and to return quickly for the World Cup preparations.

"I will keep fit while I try to get myself ready for future challenges."

If Balogun's recovery goes as planned, the German-born defender who was also eligible for Italy, will be available for the Super Eagles' World Cup preparations, which starts in May, when they face Scotland at Craven Cottage on May 28.