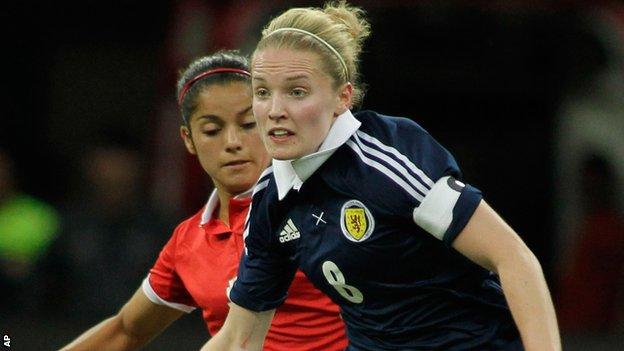 Scotland midfielder Kim Little said it would be "tremendous" to face England in the Cyprus Cup final, but knows they must focus on their last group game.

The Scots finish their Group B campaign against Australia on Monday after England meet Group A leaders Canada.

Scotland must at least match France's result against the Netherlands to reach the final while England must win.

"I know most of the England players and I know that all of our girls would be really up for it," said Little.

"But we can't think any further ahead than the last group game, which is going to be another very difficult one for us."

The Scots, ranked 20th in the world, have drawn with France and beaten the Netherlands to give themselves the chance of reaching the final for the first time.

Little, who plays for American team Seattle Reign, scored in Scotland's 2-0 victory over the Auld Enemy in this tournament three years ago, which ended a run of 17 successive defeats spanning 24 years.

The 23-year-old, who also scored in a 4-4 draw against England in the group stages last year, added: "Australia will be favourites, but we've had two fantastic results against much higher ranked teams so far and hopefully we can do it again."

Coach Anna Signeul said: "This tournament is about developing our team. It's about having the opportunity to play some top nations and gain valuable experience.

"Australia is a great team to play against for us, they are 11 places above us in the world rankings and it will be another great test."

While the Scots will aim to reach the final for the first time, 2013 champions England are hoping to lift the trophy for a third time in new boss Mark Sampson's first international tournament.

Sampson's team have beaten Italy and Finland so far but Canada, ranked four spots higher than 11th-placed England, are their toughest group opponents.

The former Bristol Academy coach said: "We'll go into the game as second-favourites against a team that's a long way ahead of us in terms of their long-term development.

"But as much as our focus is on bringing in new concepts and trying to build on our performance levels, we want to try and win this tournament."

Sampson quipped he would "rather play France" should England reach Wednesday's final, but they have not beaten the French in 14 matches, a run stretching back 40 years.