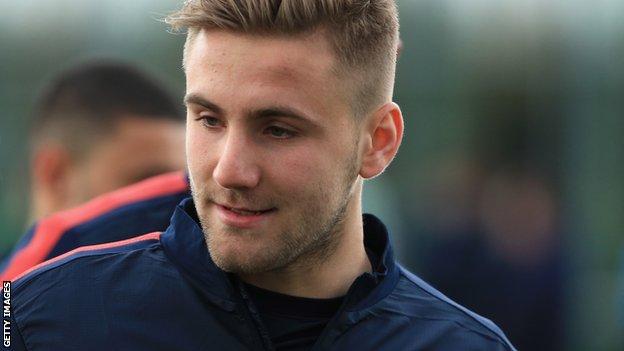 Shaw, 18, made his full England debut last week against Denmark.

The Southampton defender is expected to compete for one of two left-back spots in Roy Hodgson's England squad, along with Leighton Baines, 29, and Cole, 33.

2 June: deadline for final 23-man squad to be named

"I think Baines will play and Shaw should be taken to earn experience for the future," Taylor told BBC Radio 5 live's Sportsweek programme.

"Shaw could be seen as a gamble, but if you're taking Cole and he is not first choice, then I think Shaw should be taken instead.

"I'm not discrediting Cole for all that he has achieved with England, but everybody's time comes and in Ashley's case it is gradually coming.

"There will be a lot of time off the pitch and Ashley, with over 100 caps, will want to know why he is not playing. Better to take a boy who you know has great potential."

Cole made his England debut under Sven-Goran Eriksson in 2001 and has played in three World Cups and two European Championships.

The defender made his 107th international appearance in Wednesday's 1-0 victory against Denmark at Wembley.

Cole has played only 13 times in the Premier League for Chelsea this season, however, and is no longer an automatic pick for his country.

That mantle appears to have been passed over to Baines, not least because of the Everton defender's fine performances in two crucial World Cup qualifying fixtures in October.

Hodgson rested him for the Denmark friendly, in order to better assess Cole and Shaw.

The latter became the youngest Southampton player to win an England cap when he replaced Cole at half-time.

Coming only 16 months after his Premier League debut, it was was an experience the teenager described as "like a dream".

Taylor, who managed England for three years between 1990 and 1993, said he would also include Shaw's Southampton team-mate Adam Lallana in the 23-man squad for Brazil.

The 25-year-old midfielder impressed against Denmark as he earned his third England cap.

"The way he takes people on gives him something to offer," said Taylor.

"He has done ever so well every time he comes on and should be in the squad."