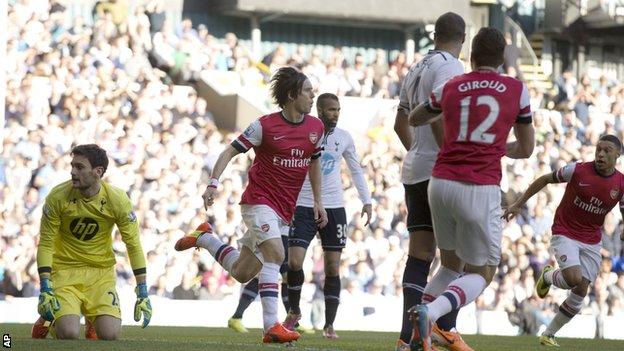 Rosicky rifled in a sublime angled drive just minutes into the game after leading a swift break for the visitors.

Tottenham's Emmanuel Adebayor flicked a shot just wide in the first half, and they dominated after the break.

Nacer Chadli's low shot was blocked on the line and Adebayor headed narrowly off target, but Arsenal held on.

The win means Arsenal are third in the standings but crucially now just four points off leaders Chelsea, who lost 1-0 to Aston Villa on Saturday.

Arsenal, who head to Chelsea next Saturday in manager Arsene Wenger's 1,000th game in charge, have a game in hand on the table toppers.

Tottenham remain in fifth but the defeat dented their chances of finishing in the top four this season. They trail fourth-placed Manchester City by seven points.

Spurs manager Tim Sherwood struggled to contain his emotions on the sidelines at times, as the result added to what has been a testing week.

They lost 4-0 to Chelsea last weekend, prompting Sherwood to accuse his players of "lacking guts and character" before suffering a damaging 3-1 loss at home to Benfica in the Europa League on Thursday.

Arsenal, though, were not without their own troubles heading into the game. They were looking to avoid back-to-back Premier League defeats and are also having to deal with a lengthy injury list, which was added to by Mesut Ozil's hamstring injury in the 1-1 Champions League draw at Bayern Munich in midweek.

With midfielders Ozil, Jack Wilshere and Aaron Ramsey on the sidelines along with forward Theo Walcott, Arsenal fans might have been concerned about where their creativity would come from, but those fears were allayed just two minutes into this game.

The Gunners broke down the right, Rosicky found Alex Oxlade-Chamberlain and, although the England international mis-controlled the ball just inside the area, it squirmed out to Rosicky, whose sweetly struck first-time effort flew into the far corner.

A decent spell of Tottenham possession ensued, but their high defensive line left them exposed to Arsenal counter attacks.

That proved the case midway through the half when Oxlade-Chamberlain skipped away from Nabil Bentaleb's attempted challenge on the halfway line but he flicked his shot wide with just Spurs keeper Hugo Lloris to beat.

Arsenal pile on the pressure

Former Gunner Adebayor was largely isolated in the first half but his first sight of goal almost resulted in the equaliser when Andros Townsend and Kyle Naughton combined on the right and the latter crossed for the striker inside the area, but his first-time shot flew just wide of the far post.

The home side were presented a golden chance to equalise soon after the restart when Arsenal goalkeeper Wojciech Szczesny pawed at a cross, pushing it on to Chadli, who was unable to find a way past defender Laurent Koscielny, who had positioned himself on the line.

It was a chance that should have been finished but it sparked another spell of dominance for the home side.

A Chadli shot flew wide of goal as Tottenham pressed, before Adebayor headed wide and then saw a long-range strike held by Szczesny as Arsenal defended well to take the three points.

"Tottenham played very well. We had an early lead and we were juggling between protecting the lead and finishing the game off. We absorbed a lot of pressure from Tottenham, they gave everything and we needed a special resilience and good defensive performance.

"It was an unbelievable start with Tomas Rosicky's goal coming from nowhere. Tottenham put the effort in and had the quality to go forward but I don't feel they had a lot of clear-cut chances.

"It was a must-win game. We maintained the focus to not make the mistake that would cost us."

Visit the BBC Sport Facebook page for a gallery of the best pictures from Sunday's Premier League matches.