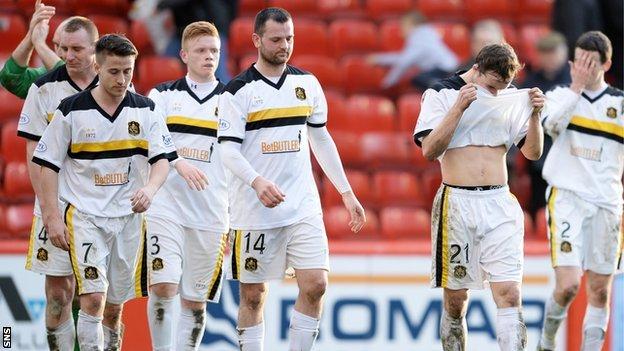 Ian Murray praised his Dumbarton players for their but urged them to focus on reaching the league play-offs.

Adam Rooney's header sent Aberdeen into the last four and ended the Sons' Cup dream but they remain well placed for a fourth-place Championship finish.

"This was a nice distraction for us," said the Dumbarton boss.

"Now it's back to the basics. We are going to pick up as many points as we can and see what happens in May."

Dumbarton performed well at blustery Pittodrie, with about 500 of their fans making the trip from the banks of the Clyde to the north-east.

Scott Linton, Mitch Megginson and Scott Agnew had chances for the part-timers when the match was goalless but it was Rooney who scored the only goal of the game, eight minutes after the break.

Dumbarton might have taken the tie to a replay had Paul McGinn's late header found the net, but Aberdeen held on to continue their impressive season.

"I thought we were magnificent at the back and we have great confidence going forward for that play-off place," Murray told BBC Scotland.

In terms of performance, work rate and commitment the players were magnificent

"I knew in the summer how good a squad we had and in January we strengthened it again.

"I'm disappointed with the scoreline, losing 1-0 to a set play, just after we had a good chance to go ahead ourselves. It was a poor corner we gave away and poor marking for the goal.

"But in terms of performance, work rate and commitment the players were magnificent from the first minute to the last, none more so than Paul McGinn getting into the box with a minute to go and heading over the bar.

"It was a fantastic chance. We know right-backs aren't known for their goalscoring power and it was proven there, but overall Paul had a fantastic game. We put up a great show."

However, Murray thinks there was always a chance that his players could have pulled off a shock.

He said: "We are part-time and Aberdeen are full-time. There is a gap but on their day any team in our division can win (against a top-tier club).

"Towards the last 10 minutes we were running on empty. The boys who were 100% fit were struggling, never mind the guys who had knocks previously.

"We were trying to hang in the game with 10-15 to go because you never know what will happen."