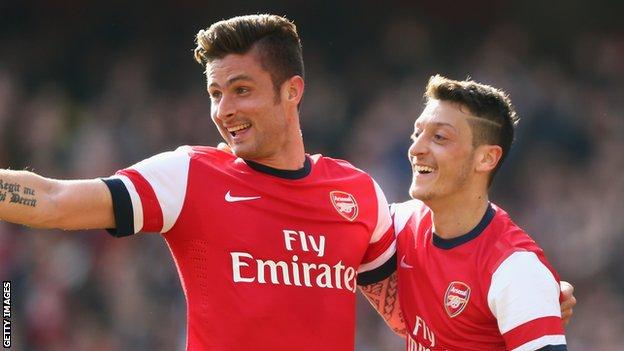 Manager Arsene Wenger believes the manner of Arsenal's 4-1 FA Cup quarter-final victory over Everton can inspire them against Bayern Munich.

Arsenal must claw back a 2-0 deficit in the second leg of the Champions League last-16 tie in Germany on Tuesday.

"It was important for us to win to put us in a good frame of mind psychologically," said Wenger.

"We can be inspired by our focus and desire and now go to Bayern with the same spirit."

As well as scoring one goal and providing an assist for another against Everton, Mesut Ozil created five chances in the win - three more than any other player on either side

Arsenal secured a place in the FA Cup semi-finals, and moved closer to ending a barren run stretching back to their 2005 FA Cup triumph, with their victory over Everton at Emirates Stadium on Saturday.

Mesut Ozil gave the Gunners an early lead but Romelu Lukaku tapped in from almost on the goalline to equalise before half-time.

Arsenal finally exerted their superiority through Mikel Arteta's twice-taken penalty after 67 minutes before substitute Olivier Giroud struck twice in the last 10 minutes to give the hosts a winning margin that was harsh on Everton.

Looking ahead to Tuesday's trip to face the European champions, Wenger added: "The statistics go against us, but let's make sure the performance goes for us and then we have a chance."

The Frenchman was delighted with the performance of £42.4m summer signing Ozil, who has been heavily criticised recently.

"I think the goal was important for him," said Wenger. "You sometimes want him to take more of a chance because he always looks for the good pass.

"I hope this encourages him, but what I also liked about him was that he looked physically regenerated with more power in his runs.

"He also did a lot of what you would call 'dirty work'. He tracked back a lot on counter-attacks and when he behaves like that you have a better chance to win the game."