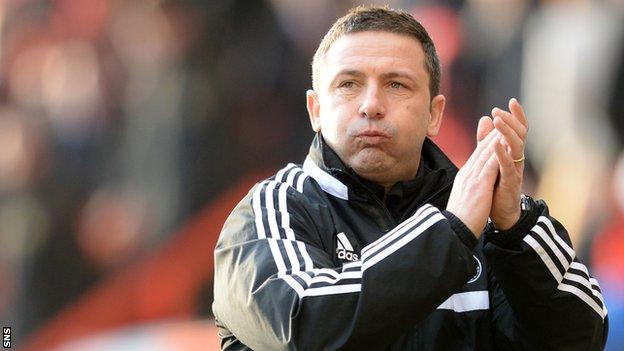 Aberdeen boss Derek McInnes said his men have earned the right to be Scottish Cup semi-finalists after they defeated Dumbarton 1-0 at Pittodrie.

"It's a big achievement with these players again," said McInnes.

"We've had three tough ties: Partick away, Celtic away, and now this one. So we've earned the right to be in that semi-final."

Dumbarton had their fair share of chances, with Scott Agnew threatening twice just after half-time, while Paul McGinn went close to forcing a replay late on.

"While the game's only 1-0 Dumbarton will feel they've still got an opportunity," McInnes told BBC Scotland. "It wasn't easy by any stretch.

"I would have liked it to be more comfortable but I anticipated a difficult game because they are a decent side. It's not often they don't score goals and I think they've averaged two on the road every game this season.

"I thought the second-half performance in particular was excellent, we had real control of the game.

"We scored from a set-play and we looked as if we could have scored from a few more set-plays. We've hit the post and asked loads of questions of them second half."

January signing Rooney brought his tally to six goals for the season, and McInnes suggested he's the missing piece in the jigsaw for his Dons side.

He said: "He's came here to score goals. He's made a career of scoring goals.

"Someone like him playing in a team on the front foot, who have people who can create chances for him, you'll see the best of his qualities. None more so than today."

Aberdeen can now turn their attention to next Sunday's League Cup final at Celtic Park. The club have sold out their 40,000 allocation, and McInnes admitted his side have struggled to get away from the cup fever gripping the Granite City.

"It's been a tough ask for the players, because we can't ignore the cup final fever that's going about the club and the city," he said.

"There's a lot to manage and organise, and it's been really difficult for the players to get their focus on today. They deserve huge credit because although at times they weren't great we were always competitive.

"It shows you how special this club is. A couple of people who have been around this club a lot longer than I anticipated 25,000-28,000. We're overwhelmed with the reaction of the support.

"It shows you the level of support that is there, the desire to get a trophy again. We're 90 minutes away from it and we'll give it our best shot. We're really looking to it and with that support behind us it can only help us.

"We can now look forward to the draw for the semi-final, and also have a good week in preparation for the cup final."