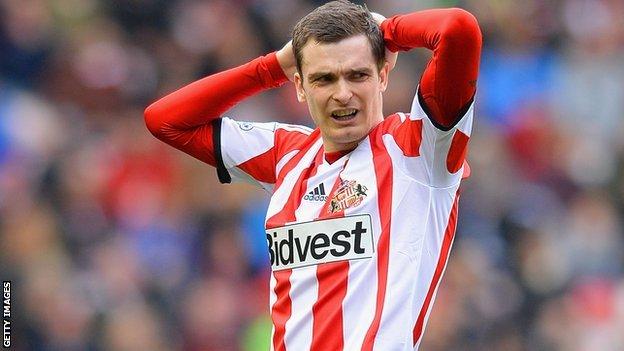 But, in a game lacking quality, the Eagles will probably be happy with a point that leaves them a place above Sunderland who are third from bottom.

The failure to win caps a difficult month for the Black Cats, who having lost the League Cup final and exited the FA Cup at the quarter-final stage, remain without a league win since beating Newcastle United on 1 February.

In difficult conditions, Sunderland adapted better than their opponents with Adam Johnson a constant menace to makeshift Palace left-back Joel Ward, who collected an early booking.

The opening chance fell to the hosts when Johnson's right-wing cross looked to be perfect for Steven Fletcher at the back post, but Palace defender Adrian Mariappa was enough of a nuisance to prevent the striker getting his header on target.

Fletcher should have put his side ahead midway through the period when Borini fired across goal, but he could not make a clean connection.

Sunderland have won just three times at home this season, all by the odd goal, and only once in their last eight games at the Stadium of Light.

Johnson continued to be the Eagles' main tormentor and when he squeezed free on the right, he again fed Fletcher only for the Scot to miscue his first-time shot.

Sunderland goalkeeper Vito Mannone narrowly avoided calamity when he lost his footing and hacked the ball straight to Thomas Ince. Luckily for Mannone, the Eagles midfielder did not get his shot away quickly enough.

It was beginning to look like it was one of those days for Fletcher when Borini flashed a ball across goal and he narrowly failed to get his boot to it.

Fletcher was replaced by Jozy Altidore at the interval, and the United States frontman should have made an immediate impact. But he could not control the ball well when eight yards from goal, eventually seeing his left-foot shot blocked for a corner.

Livewire Italian Borini, who along with Johnson provided what rare quality was on offer, thought he had put the hosts ahead when he was played in just to the right of goal, but his shot hammered off the upright.

Palace midfielder Dikgacoi should have given them just a second Premier League away win of the season, but missed the target when just yards from goal.

"The players tried everything and I thought we did things better today. We controlled the game.

"In other games we weren't a threat, but today we tried to get the ball in the box a lot - maybe too much at times.

"The strikers have demanded it, but that inch is not going our way at the moment. I'm very calm today. Nothing will change [in the relegation battle] until the last game.

"If we try and fight like we did today, then we have a chance."

"Gus said beforehand that this was a 'must-win' game for Sunderland, but I've been in this game long enough to know how quickly things can change around.

"Lose the next three, then win three on the bounce and you're almost there.

"For us, we saw it as 'must not lose' and I couldn't ask any more of my lads - they've got big, big hearts.

"They're very tired in that dressing room, but because they worked so hard I think Julian Speroni has only had to make two saves."