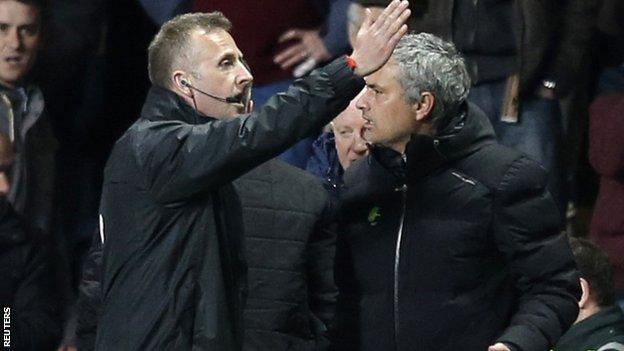 Chelsea's title bid suffered a major blow with a defeat by Aston Villa in which two Blues players and manager Jose Mourinho were sent off.

The league leaders, who had a first-half goal ruled out for handball, were reduced to 10 men when Willian was shown a second yellow card.

And Villa made the extra man count as Fabian Delph finished Marc Albrighton's low cross with a superb back-heel.

Ramires and Mourinho were then both ordered off in a bad-tempered finale.

The Blues' boss was sent to the stands for protesting during the melee that followed a two-footed lunge by Ramires on Karim El Ahmadi.

Mourinho has repeatedly played down his team's title chances and, on this evidence, he may be justified after a lacklustre performance that raised serious questions about their ability to stay on top of the pile.

The Blues created few chances in either half, with striker Fernando Torres anonymous up front and Brazilians Oscar and Willian lacking spark.

Villa, meanwhile, were good value for a victory which moved them up to 10th in the table, and could have won by a greater margin had Delph's late effort not deflected off Gary Cahill and onto the crossbar.

Chelsea reprised their habit of starting slowly, failing to score in the first half for their fourth successive Premier League game.

A soporific opening period only came alive in the closing stages when Villa striker Christian Benteke flashed a low volley from outside the box narrowly past a post, before Chelsea midfielder Nemanja Matic was denied what would have been his first goal for the Blues.

The Serbian was unmarked at the far post as John Terry flicked on Willian's corner, but the ball bobbled off his thigh and onto his arm before he bundled it past Brad Guzan.

Chelsea began the second period on the offensive and were almost rewarded when Eden Hazard's cut-back deflected towards goal off El Ahmadi, requiring Guzan to claw clear.

With chances few and far between, Chelsea were looking to their more creative players to unlock the door but, when Oscar found space in the area, he could only side-foot tamely at Guzan.

Villa remained a threat on the break and almost took the lead through Benteke. After exchanging passes with Andreas Weimann, however, the Belgium international stroked his effort inches wide.

Midway through the half, Chelsea were reduced to 10 men when Willian - who had earlier been booked for upending El Ahmadi - was shown a second yellow card for tripping Delph as he scampered towards goal.

Then, with eight minutes remaining, Villa made their numerical advantage tell as the ball was swept across the pitch to substitute Albrighton, whose low cut-back was back-heeled outrageously into the far corner by Delph.

Deep into stoppage-time, Chelsea's frustrations boiled over as Ramires jumped into an ugly challenge with El Ahmadi and was immediately shown a red card by Chris Foy.

Mourinho was then sent to the stands as he tried to enter the field to talk to Foy, compounding a miserable evening for the Blues.