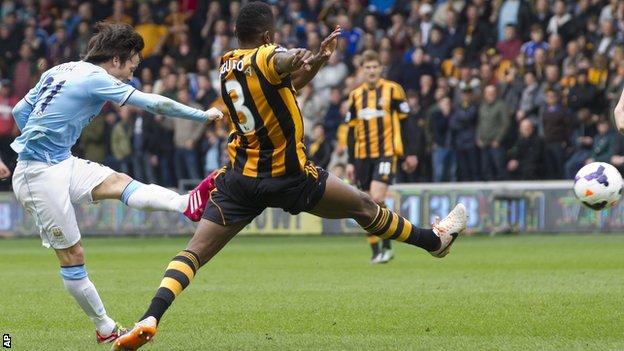 Manchester City recovered from Vincent Kompany's early dismissal to edge out Hull City and move up to second in the Premier League table.

Captain Kompany saw red for bundling over Nikica Jelavic as the Croat ran towards goal inside 10 minutes.

But David Silva's superb strike settled the nerves and Pablo Zabaleta almost made it 2-0 when his shot hit the bar.

The Tigers had plenty of possession but created little and Edin Dzeko sealed the win late on with a cool low finish.

Dzeko slotted past Allan McGregor after some excellent build-up play and a fine outside-of-the foot pass by City's standout player Silva to ensure the visitors keep the pressure on leaders Chelsea after a miserable week in which they went out of the FA Cup and Champions League.

It was Silva's stunning strike - within five minutes of Kompany's red card - that gave City a boost just as it looked like there was potential for the title challenge to start unravelling on the back of defeats against Wigan and Barcelona.

Up until the dismissal, the hosts had looked the brighter side, despite being on a miserable run which had seen them lose four and win just one of their last seven top-flight matches at the KC Stadium.

The Croat had already threatened twice before he outmuscled a hesitant Kompany and was grappled to the floor - though the Belgian was furious with referee Lee Mason's red card, claiming he had initially been fouled by Jelavic.

Yet despite their numerical disadvantage, it was City who started to look the more dangerous.

They played increasingly on the break after Silva's wonderful curled strike and almost doubled their lead when full-back Zabaleta crashed a 20-yard volley against bar after a powerful run from Yaya Toure.

Ahmed Elmohamady was fortunate to only be cautioned for a studs-up challenge on Silva and, as Hull upped the tempo, David Meyler had a goal ruled out for offside and Jake Livermore sent a skidding long-range shot just wide.

Unsurprisingly, Hull began to enjoy greater possession after the interval and made a bright start.

Hull have now lost five of their last eight home league matches, with their only Premier League victory at the KC Stadium since 1 December being a 6-0 thumping of Fulham on 28 December.

Shane Long had a fierce strike saved by Joe Hart, Jelavic failed to properly connect with an inswinging free-kick and City striker Dzeko made a fine headed clearance to thwart James Chester.

The first came as Hart dived at his feet, the Hull forward's reaction provoking an angry response from the goalkeeper, but the second appeal after a needless nudge by Fernandinho could easily have resulted in a spot-kick.

Then, after Jelavic had again failed to get on the end of another cross, Dzeko's goal ensured City are now six points behind Chelsea - who lost 1-0 to Aston Villa in the evening kick-off.

"The turning point was the Silva goal. They defended deep, we huffed and puffed and it ended up being a frustrating afternoon.

"We had a wonderful opportunity but we weren't good enough to take advantage. We struggled to create a clear opening. We didn't have that craft."

"I will have a word with George when the dust settles. Most players are waiting for the contact. The referee has made the right decision.

"The push in the back looked like a penalty."

"It was a very good response after a very difficult week. We played well with and without the ball.

"It was a clear foul by Jelavic against Kompany before the tackle by Kompany. But the referee did not see it.

"I trust my players and the team. We kept the ball very well today - and without the ball you cannot make damage. I don't remember any clear chances for Hull."