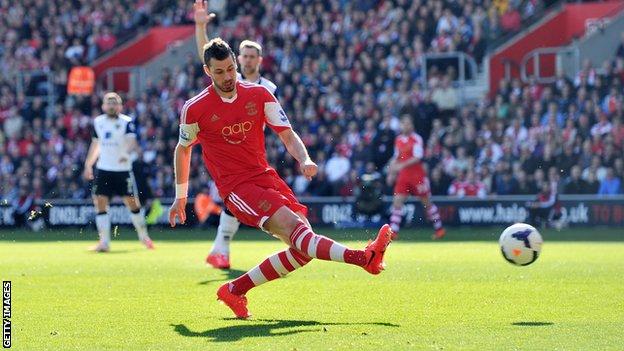 Morgan Schneiderlin raced on to a Gaston Ramirez through-ball to put the Saints ahead, before Rickie Lambert calmly side-footed a second goal.

Jay Rodriguez steered in a third as the Saints looked to be easing to victory.

With Chris Hughton's side chasing an unlikely point after being outplayed for the opening 85 minutes, they left themselves exposed to a counter-attack in injury-time and Gallagher was played in by Steven Davis to complete a remarkable end to the match.

Southampton were leading 3-0 and had looked in complete control against a Norwich side that had been woeful and struggled to create any chances.

But two goals in a minute, from Elmander and Snodgrass, following mistakes from Jose Fonte and Guly Do Prado, left the hosts hanging on before Gallagher's injury-time intervention.

With the team finishing in sixth place likely to qualify for next season's Europa League, Southampton could be playing in European competition for the first time since 2003-04.

Mauricio Pochettino's side are now eighth in the Premier League, six points behind sixth-placed Everton, and face crucial meetings with fellow-top 10 teams Tottenham and Newcastle in their next two games.

The Canaries, 15th in the table, face a critical spell, too, as they meet other struggling sides - Sunderland, Swansea, West Brom and Fulham - in their next four matches, before ending the season with games against Liverpool, Manchester United, Chelsea and Arsenal.

Norwich boss Chris Hughton had gambled by changing five of his side from the team that drew 1-1 with Stoke last week, with club captain Sebastien Bassong and £8.5m record signing Ricky van Wolfswinkel on the bench.

But the moves did not pay off as Southampton immediately put them under pressure.

Ramirez, in his second Premier League start of the season, headed over James Ward-Prowse's corner in the second minute before the hosts went ahead three minutes later.

More away woe for Norwich

England striker Jay Rodriguez, in front of watching national boss Roy Hodgson, linked up with Ramirez, who slid a well-weighted ball through a static Canaries defence and Schneiderlin ran on to the pass and finished well.

Davis and Ramirez both wasted good opportunities to double the hosts' lead and Southampton remained on top in the second half with John Ruddy saving Ward-Prowse's 25-yard effort and Adam Lallana flicking a corner wide.

The Saints captain was then replaced by Lambert and the England forward needed only 66 seconds to net his 10th goal of the season.

A clearance was flicked backwards by Norwich's Ryan Bennett and it fell to Lambert, who cut inside a half-hearted challenge from Joseph Yobo before calmly dispatching for 2-0.

Norwich made a triple substitution but Southampton went further ahead as Do Prado's shot was blocked and the ball fell to Lambert, who set up Rodriguez to score.

Rodriguez then hit the bar, before the game turned. Fonte's sloppy backpass let in Elmander and he prodded in for Norwich in the 85th minute, before Snodgrass followed up to convert after Artur Boruc could only parry Van Wolfswinkel's effort 60 seconds later.

But it would have been a travesty if Southampton had thrown this game away and Gallagher broke in injury-time to score his first league goal and give Saints the three points.

"We were leading the game 3-0 and had it in control but we suffered a bit at the end.

"In football, nothing is finished until the final whistle. We lacked focus at the back and you can't take anything for granted in the Premier League.

"We were far superior to Norwich throughout the game and we were playing against a very good team."

"We rallied in the end and made a game of it but we didn't deserve to be in that position as we had conceded poor goals.

"We had periods where we weathered the storm and got into good areas, but it was not consistent enough.

"At 3-0 down it was tough and it was nothing less than what we deserved, but we dug in and showed character."