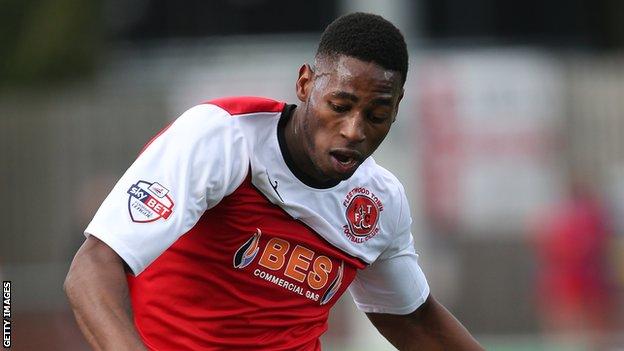 Jon Parkin pounced to put the hosts ahead after Jamille Matt's shot was saved by Trevor Carson.

Antoni Sarcevic then doubled the lead from the spot after Daniel Alfei was adjudged to have pushed Josh Morris.

After the break Matt stabbed home Fleetwood's third after a defensive mix-up before Jed Wallace grabbed a consolation after a mazy run.

The win leaves fourth-placed Cod Army three points behind an automatic promotion spot, while Pompey are just four points above the relegation zone.

"We needed to make sure we got three points to make the draws we've had positive results.

"We started really well and played some great football, created some opportunities and took them.

"We've been waiting for Jamille to get back to fitness because we know what a good player he is for us."

"I thought we created more chances than we have done for quite a while, to be fair. Again, I'd have to say fair play to them defensively, they threw themselves in front of everything.

"The start obviously wasn't ideal in terms of, you know, the first goal and obviously the penalty doesn't half knock the stuffing out of you when it's a decision like that."

(On the penalty): "I don't even know if Dan Alfei knew that the lad was there. I think they've pretty much ran into each other. You see them sort of 15 times a game really and if that was the case every time, then you know, so obviously that made it tougher.

"Obviously you miss (captain Ben Chorley's) leadership skills and his organisational skills out on the pitch, but I thought the lads did okay. It was always going to be tough up against two difficult front men."