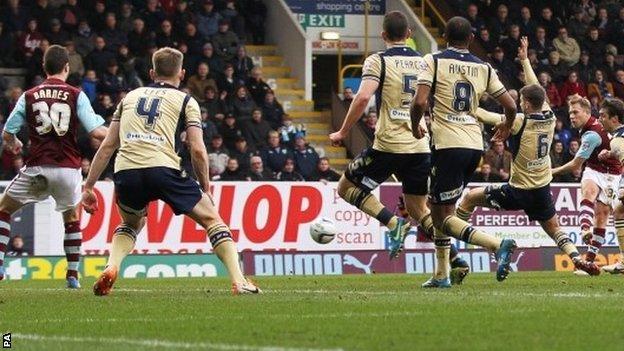 Burnley came from a goal down to beat Leeds and strengthen their grip on second place in the Championship.

Ross McCormack, who had earlier hit a post after running clear, put Leeds in front with a powerful header from a Connor Wickham throw.

But the Clarets replied when Jason Pearce diverted Kieran Trippier's cross into his own net.

And Scott Arfield clinched the win when he met Ben Mee's cross and fired home at the second attempt.

Sean Dyche's side are still unbeaten at Turf Moor in the league this season and have not lost in the Championship for 14 matches.

This win allowed them to increase their lead over third-placed Derby to 10 points, after the Rams were held at Reading, but Burnley had to battle to see off a Leeds side who pushed their promotion-chasing hosts hard for long periods.

Burnley's last league defeat was a 1-0 loss at Middlesbrough on Boxing Day. They have won eight and drawn six of their 14 games since then.

Matt Smith was denied by Burnley goalkeeper Tom Heaton before McCormack dashed clear, dinking the ball over Heaton but seeing it come back off anupright before Jason Shackell blocked the rebound.

Leeds did take the lead after 27 minutes, when Smith flicked on Wickham's throw for McCormack to nod past Heaton.

Burnley, who had seen Ross Wallace and David Jones go close early on, hit back before half-time when Pearce made a hash of his attempt to deal with Trippier's cross.

Both sides had chances after the break, with Leeds going close when Alex Mowatt miscued from a McCormack cross and Smith fired over.

At the other end, Arfield saw his first effort blocked from Mee's cross, but the ball came back to him and he drilled a low shot into the net.

The closest Leeds came to an equaliser was when Luke Murphy sent over a teasing corner which Smith and Pearce failed to make contact with from point-blank range.

Defeat means Brian McDermott's side stay 14th, without a win in six matches.