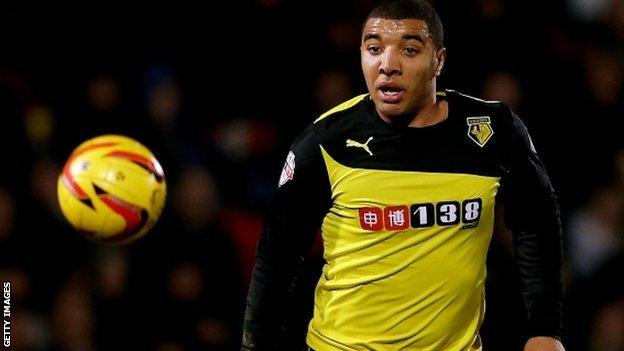 Barnsley slumped to the foot of the Championship as Watford breezed to a fifth-straight home league win.

The Hornets were in command within 16 minutes after Cristian Battocchio scored, then Troy Deeney netted his 17th goal of the season.

And the Vicarage Road faithful were sent home happy when Alexander Merkel added a third 16 minutes from time.

A poor Barnsley side rarely threatened and they are now three points from safety, while Watford are 11th.

Watford still have an outside chance of making the play-offs, sitting nine points behind sixth-placed Nottingham Forest with a game in hand and 11 matches remaining.

Only five minutes were on the clock when Daniel Pudil's cross was converted superbly from 20 yards by Battocchio.

Barnsley rarely looked like breaking a sequence that now extends to over 10 hours without conceding a goal at home for Watford.

And Merkel finished the job off with his first for the Vicarage Road club with a neat finish to beat Luke Steele from six yards.

"There have been a lot of very candid words spoken. The season is far from over but if they are going to start believing what people are writing about us it will be.

"We've got to have a little cocoon around us and make sure we don't take it to heart and really believe we can stay up."

Watford manager Giuseppe Sannino on bouncing back from midweek defeat at Doncaster:

"I'm pleased about the performance and we were able to give some cheer to the crowd, but I am demanding guy and we can improve."