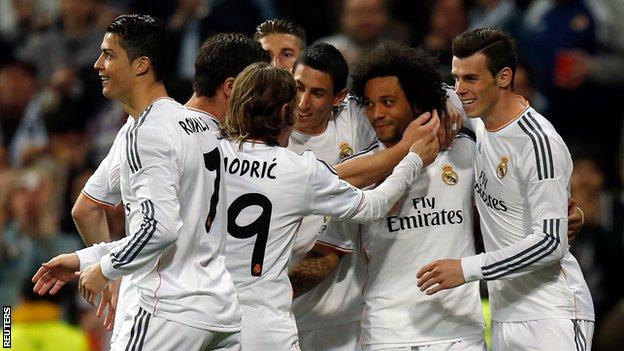 La Liga leaders Real Madrid maintained their control of the Spanish title race with a ruthless win against Levante.

The Brazil left-back created space with a cute stepover and curled into the far corner before Levante were reduced to 10 men after David Navarro's dismissal.

Nikos Karabelas then slid into his own goal as Real moved three points clear.

After rivals Barcelona and Atletico Madrid both played on Saturday, focus switched back to Real in a three-way title battle which is showing no signs of losing intensity.

Carlo Ancelotti's side began the game in second place after Atletico had moved top, courtesy of their superior head-to-head record against their neighbours, with a 2-0 win at Celta Vigo.

Reigning champions Barcelona were a further point behind the pair after a shock 1-0 defeat at relegation-threatened Real Valladolid.

It meant Real Madrid went into the Bernabeu contest knowing the destination of the title was firmly in their own hands.

Los Blancos, who are now unbeaten in 29 matches across all competitions, will regain the title from Barcelona if they manage to win each of their remaining games, including their home 'El Clasico' match against Barca on 23 March.

And anything other than a home victory against mid-table Levante rarely looked in doubt. The hosts began at a ferocious pace and played with an assurance and swagger that continued throughout a dominant display.

After piling on the early pressure, Real found the breakthrough when Ballon d'Or winner Ronaldo climbed above a static away defence to nod in his 38th goal of the season.

Real continued to dictate the tempo and, although Levante regained their composure to provide some resistance, goalkeeper Keylor Navas had to produce several superb saves before half-time.

His defiance lasted less than four minutes after the restart, though, as Real opened up a deserved two-goal cushion.

Levante keeper Keylor Navas made eight saves against Real Madrid - more than in any other La Liga game this season.

Marcelo scampered down the left flank and played a neat one-two with Ronaldo before producing a sublime piece of skill - and the finish to match - to score his first Real goal since September 2012.

Levante's uphill task was made even harder when defender Navarro was shown a straight red card for a crude challenge on Ronaldo.

Real continued to press with their numerical advantage, without showing their previous urgency, as Levante struggled to keep the hosts at bay.

Shots on Target
Home10
Away1