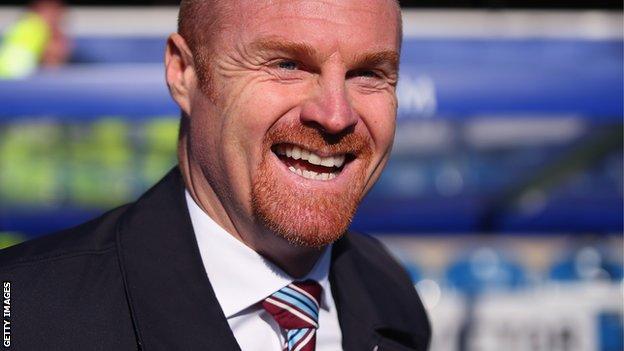 Burnley boss Sean Dyche says Blackburn will have to deal with the weight of history during Sunday's Lancashire derby as the Clarets aim for their first win against Rovers since 1979.

Dyche's side lie second in the Championship, eight places and 20 points above Gary Bowyer's Rovers.

"We go into it very confident and knowing the expectation is on Blackburn because of the history," said Dyche.

"We haven't beaten them in over 30 years so there's expectation on them."

The former Watford manager, 42, told BBC Radio Lancashire: "They'll be thinking 'we need to win again to keep that record going'. We can go in there with freedom and we're certainly looking forward to the game."

Can Burnley break the hoodoo?

Burnley have not beaten Blackburn since a 2-1 success at Ewood Park in April 1979.

The Clarets came within seconds of ending their hoodoo last March, but were denied a long-awaited victory by David Dunn's late equaliser.

Burnley's good start to the season came as a surprise to many but they have maintained a position in the top two for much of the campaign.

Last weekend's 2-0 home win against Derby, which stretched their unbeaten league run to 11 games, put the Clarets five points clear of the Rams in third.

And while gaining local pride is important to Dyche, cementing an automatic promotion spot is just as crucial.

"The reality is that it's another game and that's my focus. If you get the performance right and you get the outcome you want, everyone will be delighted from the Burnley side of things.

"We're aware of what it means and it comes down to the players delivering a performance."

Victory is just as important for Blackburn, who still have aspirations of reaching the play-offs in May.

A 4-0 defeat at Bolton last Saturday saw Rovers slip six points behind sixth-placed Wigan and Bowyer's side are desperate for a positive response against one of the Championship's in-form teams.

"Any derby is a one-off game and league tables go out of the window," Bowyer, 42, told BBC Radio Lancashire. "That's certainly the case in this one for us."

Bowyer, who took charge of a Lancashire derby for the first time in September when the sides drew 1-1 at Turf Moor, continued: "It [the derby] is great and something you want to be involved in.

"You're involved in football for atmospheres, games and days like that. I'm sure that it will be the same on Sunday.

"The most important thing is that everybody comes and cheers their team on, and then goes home peacefully."

Blackburn could give a debut to defender Michael Keane, who joined on loan from Manchester United on Friday.