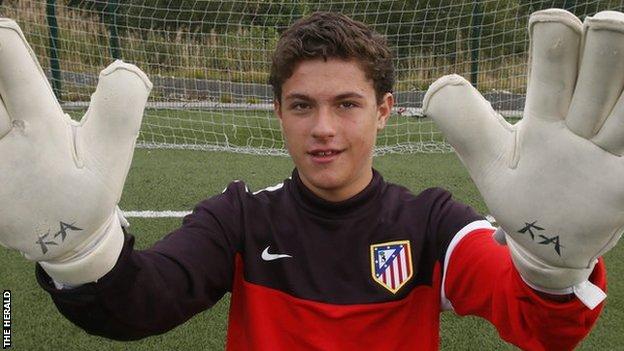 Celtic will beat Everton and Liverpool to the signature of a 13-year-old goalkeeper only days after he made his debut for Hamilton Under-20s.

Joshua Rae, who is 6ft 1in, played the final six minutes of Monday's 3-1 win over Partick Thistle's second string.

Although this is not a huge amount of money, it will be a welcome boost to our youth academy's coffers

He was due to have a second trial spell with Liverpool, having also been with Premier League rivals Everton.

Rae, who had previously been with Celtic and also travelled to Spain for a trial with Atletico Madrid last year, had become the youngest player to appear for Accies at under-20 level.

Maitland hoped to persuade the Croy teenager and his family to continue his development with the Scottish Championship club.

"I am disappointed to lose another player," said Maitland, the ex-Accies team manager who is now the director in charge of youth development.

"But I recognise that, as a Celtic supporter, when Celtic come calling, it is hard to resist.

"My argument was that he has developed better with us since leaving Celtic two years ago, but he will be signing for Celtic next week after he attends a Scotland trial."

Hamilton have earned a reputation for developing young talent, the most high profile being midfielders James McArthur and James McCarthy, who joined Wigan Athletic before McCarthy moved on to Everton.

However, Maitland said the fee they will receive from Celtic for Rae - two initial offers were rejected - will be miniscule in comparison to the near £2m generated from those deals.

"Celtic have been very professional, have handled it in the right manner and the compensation will be slightly more than what would have been due had he left at the end of the season," he said.

"It takes £250,000 per year to run our youth academy and, although this is not a huge amount of money, it will be a welcome boost to its coffers and it will mean more should he ever play for Celtic's first team.

"We would like to keep our best young players, but this is reality and is another compliment for the guys who run our young academy."

Rae is bidding to become the latest player to leave Graeme High School in Falkirk for a career in professional football, with previous successes including former Scotland, Liverpool and Celtic defender Gary Gillespie and current Falkirk players Robbie McNab and Craig Sibbald.