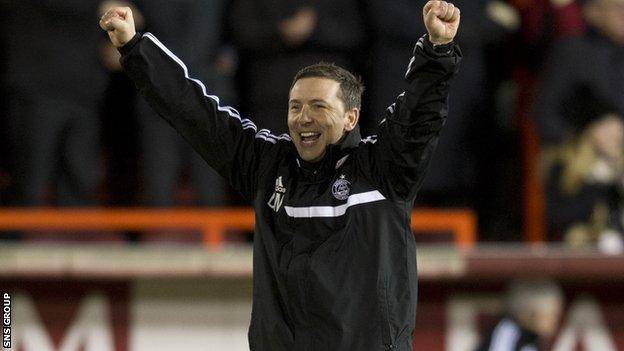 Manager Derek McInnes insists a first cup final in 14 years will not distract Aberdeen from their bid to reach a second in the space of three months.

The Dons take on Inverness in the League Cup final a week on Sunday.

And on Saturday they host Dumbarton in the Scottish Cup with a semi-final place up for grabs.

"It's a quarter-final of a Scottish Cup and they don't come around that often," said McInnes. "That's why we need to be focused on the job in hand."

Aberdeen have not lifted a major trophy since their League Cup success in 1995 and have not reached a final since their 4-0 Scottish Cup hammering by Rangers five years later.

The long wait for silverware could be over soon but McInnes and his squad have their sights on achieving more.

"We've got so much to look forward this season and the players are bang up for it," added the manager.

"It's not been difficult to concentrate on the Dumbarton game. I'm well aware of the importance of what is coming up. Around the city, there's a lot of talk about the cup final and rightly so.

"But we are the professionals of the club and our focus has to be on Dumbarton on Saturday and that is the case.

"Dumbarton are a good side and the players are well aware of that. They are the highest scorers in their league and I don't think they'll come here with any real fear.

"I've seen them a few times and always been impressed. They have good energy and a good blend of youth and experience."

Aberdeen have sold close to 40,000 tickets for the League Cup final at Celtic Park and McInnes is not surprised by the enthusiasm of fans.

"It's something we should be really proud of," he added. "It shows the level of support we have out there.

"It's great for the players and for the staff to see that - it's very encouraging and long may it continue. It's our first cup final in a while and we certainly don't want it to be our last.

"I'm really pleased with the response from the support. Am I surprised? Probably not. People who have been around the club for a long time had anticipated that kind of thing - 30,000 plus. But to go above that and go near 40,000 is magnificent."

Peter Pawlett admitted that is has been "difficult not to think about" the impending League Cup final but the midfielder is also excited by Saturday's challenge at Pittodrie.

"The chance for us to get into the semi finals of the Scottish Cup is massive," said the 23-year-old.

"We feel as if we can win every game when we go out on the pitch and it wasn't always like that."