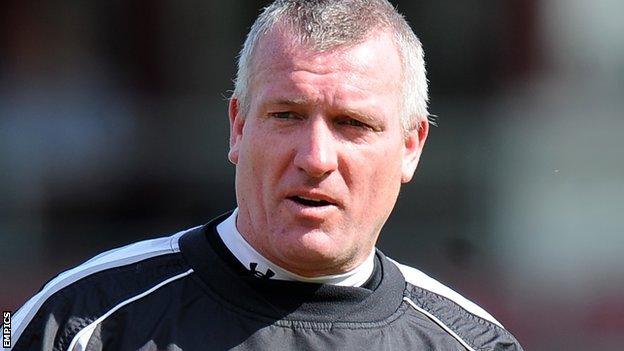 Flowers, 47, a Premier League winner with Blackburn Rovers in 1995, has been appointed by Whild as his first-team coach until the end of the season.

Former Harriers striker Steve Guinan will continue to have some involvement.

The Name Rings A Bell

Whild has also made his first signing, bringing in Birmingham City defender Amari'i Bell, 19, on loan.

The Blues academy product signed from Solihull Moors in 2011, has signed on loan until the end of the season.

He has been out on loan in the Conference Premier already this season with Nuneaton Town, having been on the winning side against Harriers back in August during Boro's eight-match unbeaten start to the season.

"Games are coming thick and fast so we need to help the lads by bringing one or two in," said Whild, former manager Steve Burr's assistant, brought in from the cold to replace the sacked Andy Thorn on Wednesday.

"Amari'i can play in a number of positions," he told BBC Hereford & Worcester.

"He's already played in the Championship and it's good to bring in someone like that in. It gives us a bit of cover on the left-hand side. "

Bell made his Championship debut in Blues' 2-1 home defeat by Leicester City at the end of January, having been recalled from Nuneaton by boss Lee Clark as cover for injuries, but a batch of January signings have freed him up for another loan move.

He is hoping to make his debut for the club in Saturday's trip to managerless Wrexham - a repeat of last season's play-off final, between two teams both having an indifferent season.

Kidderminster, 10th in the table, are just four points adrift of the play-off pack, while Wrexham, their conquerors over two legs in April, are a further four points back in 14th, following Andy Morrell's departure as manager on 24 February.

After completing his first deal since being restored to first team duties following the departure of Harriers chairman Mark Serrell and manager Andy Thorn, Whild is expected to oversee more transfer activity at Aggborough before this season's loan deadline on 28 March.

But, with Guinan kept busy by his main job as academy manager, Whild was keen to appoint a number two of his own. And Flowers, initially brought to Aggborough as goalkeeping coach by Burr in February 2010, fits the bill.

"Everybody knows about Tim's background," Whild told BBC Hereford & Worcester. "His CV speaks for itself.

"He's as keen as mustard to be involved and it will be great to have someone of that experience and knowledge around the place."