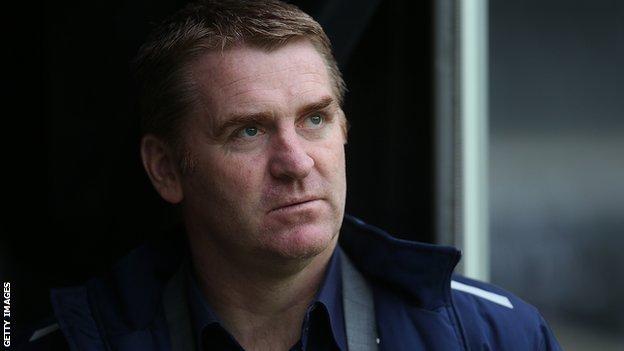 Walsall boss Dean Smith has not given up on his side's bid to make the League One play-offs, despite an untimely run of just one point in five matches.

Wednesday night's 2-1 loss to Coventry City leaves the Saddlers five points adrift of sixth-placed Peterborough United, who have a game in hand.

But, ahead of Saturday's home derby date with Wolves, Smith said: "We're not giving up by any shadow of a doubt.

"People can talk about being on a slump of results, but not our performances."

In the wake of Aston Villa loan signing Nathan Delfouneso's late Sky Blues winner at Sixfields, in a game that could easily have gone the other way, Smith told BBC WM: "We won't have that sort of talk in our dressing room.

"We've worked hard to get to where we are. We're all about performances and, if we keep putting in performances like that, we'll get wins."

One area of current weakness is up front, Walsall having scored just four times in their last six games, since winning 5-1 at Notts County last month. But, after being denied a point by several brilliant saves from Coventry goalkeeper Joe Murphy, Smith is confident that goals will come if they keep creating chances.

"We've not got the points that we have deserved in the last six games, but the lads have worked hard and kept that belief," said Smith.

"It's about us continuing to do the right things and now we look forward to Saturday's game.

"We'd like to go to the Wolves game on the back of a better result but I'm not certainly unhappy with the performance."