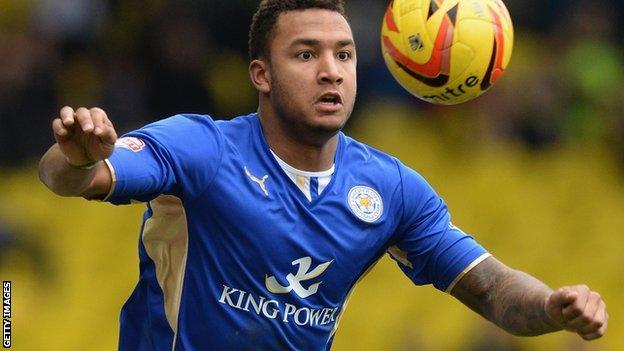 Leicester City defender and life-long fan Liam Moore says he would like to make 500 appearances for the club.

The 21-year-old has played 28 times for the promotion-chasing Foxes this season and is currently just three games away from his 50th appearance for the club.

Moore told BBC Radio Leicester: "I want to stay here, progress and play at Leicester in the Premier League.

"Fifty is good but my ultimate aim is hopefully, down the line, maybe 500 appearances. You never know."

Moore earned his second cap for England Under-21s in Wednesday's 1-0 win over Wales.

"It's an honour to put on the Three Lions, whether for training or a match-day," Moore added.

"I've been hoping to get a game for a while. Whether its for club or country, I want to be playing. That's just the kind of player I am.

"I've been patient and now my chance has come around hopefully I've done myself a bit of justice.

The Foxes boss on Moore

"Liam has worked exceptionally hard. He is playing with experienced players and experienced players can sometimes be the best coaches. Wes Morgan has been fundamental in Liam's development but he has also had time out on loan as well. The last season-and-a-half has been a huge learning curve, but he has managed to keep in control of the hype."

"It was quite a slow performance. We won the game but, as England players, we expect to win against any team in the world. So it's job done result-wise but the performance could have been a little bit better."

Moore has only played once for Leicester since January, with centre-back pairing of Marcin Wasilewski and Wes Morgan both in excellent form.

"On a personal note it's very frustrating but on the other side of things I'm a squad player, I'm a Leicester City fan and whether I'm in the team or not and we're top of the league, I'll take that any day," he added.

"At the moment, we're playing well and we don't need to worry about the teams behind us.

"If we can carry on the form we've been in, we'll get promoted, and it's a great position to be in."