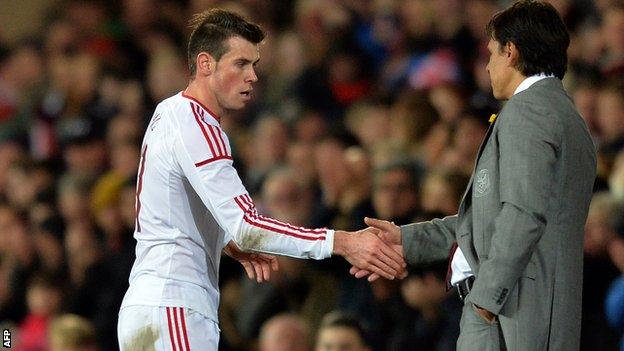 Wales boss Chris Coleman joked he had nearly asked Gareth Bale for his autograph after the forward's starring role in a 3-1 victory over Iceland.

The Real Madrid player, 24, set up the first two Wales goals in the friendly in Cardiff, then capped a man of the match display with the third.

Wales should enjoy him, because as you can see he certainly enjoys playing for Wales... he's a patriotic Welshman

"He was absolutely spectacular... I nearly asked him for his autograph at the end of the game!" Coleman said.

"He's one of the best players I've ever had the pleasure of working with."

Bale set up goals for James Collins and Sam Vokes before charging down the touchline from inside his own half and cutting inside to drill home.

"Wales should enjoy him, because as you can see he certainly enjoys playing for Wales... he's a patriotic Welshman.

"I said 18 months to two years ago, he was going to get better and people thought 'how could he?'

"But he's a sensational player and it was great to have him because he has had a busy period, he's got 10 or 11 games in a short space of time with Madrid."

Bale crossed for Collins to head in from a 12th-minute free-kick but Iceland replied before the break as Johann Gudmundsson's shot was deflected in off Ashley Williams.

Bale, who joined Real Madrid for a world-record £85.3m in the summer, then raced down the right and had a shot cleared off the line, allowing Vokes to head in the second, before his brilliant solo goal.

Though Bale took the headlines, Coleman was delighted with the team's overall performance as they build towards their Euro 2016 qualifying campaign, which begins in September with an away match against Andorra.

"You want a win and that's what it's all about, but there was a lot of good things came out of the game," Coleman said.

"It's another good result for us against a strong team and some of our play was very good.

"Second half we were a lot better, more confident with the ball, more imagination and we showed a bit more risk - and we have to show risk if we're going to score goals.

"The way we play sometimes, if we lose the ball it can be in dangerous areas, but we want to take that risk because we want to score and we want to win games."