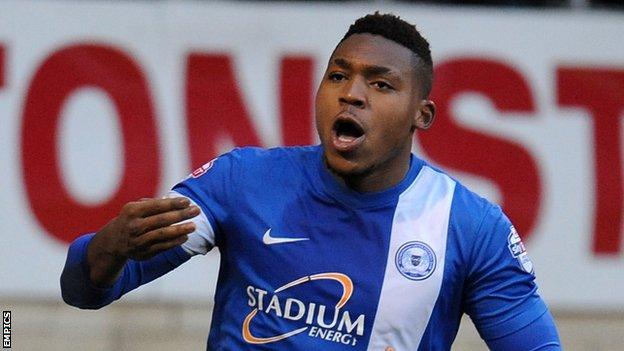 Peterborough boss Darren Ferguson has rested top scorer Britt Assombalonga to avoid a repeat of his fatigue in the final part of last season.

The 21-year-old scored 12 goals in his first 22 games for Southend last term, but netted just four in 27 after that.

Assombalonga, who also has a gashed leg, only played the final 35 minutes in Tuesday's loss to Sheffield United.

"I spoke to him on Monday morning and he is feeling it physically," Ferguson told BBC Radio Cambridgeshire.

"We're not concerned, but we're aware that this happened last season - plus the knock as well."

Assombalonga noticeably tired towards the end of last year's League Two campaign on loan at the Shrimpers - his first full season as a senior footballer.

He made the permanent switch to Posh from Watford in the summer and so far has 24 goals from 43 appearances.

Midfielder Michael Bostwick was also on the bench against the Blades, failing to start a game for only the second time this season.

"I think it's really difficult to ask any players to play so many games and I think we're going to end up playing more games than most teams this season," said Ferguson.

"Michael is the same. He's played pretty much every minute of every game. It's common sense, I've got to freshen it up.

"Our aim is the play-offs and you want to be fresh going into it. There's no way I can keep playing the same players."