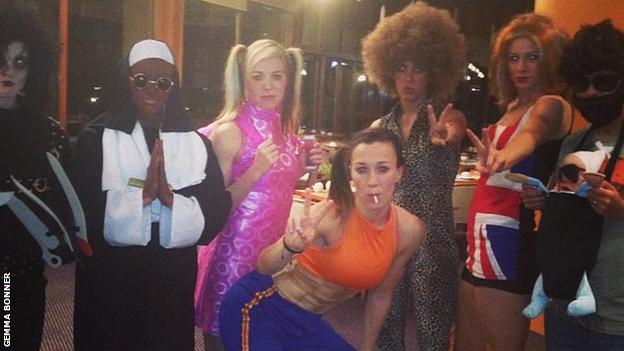 England forward and anti-racism campaigner Toni Duggan has apologised for painting her face black and dressing up as film star Whoopi Goldberg for a fancy dress party.

The Manchester City Ladies striker, a Kick It Out ambassador, imitated Goldberg's character in Sister Act.

"I am very sorry for my actions and for any offence," said 22-year-old Duggan.

Kick It Out said Duggan retained its support and would keep her role as an ambassador with the anti-racism group.

An England spokesperson said: "We are aware of the images. We have asked for the photos to be removed and are dealing with the matter internally."

Photos of the England players, some of whom were dressed at the team party as pop stars from the Spice Girls and Edward Scissorhands, were posted on their Twitter and Instagram social media accounts before later being removed.

They were taken during a party while players were on England duty for the Cyprus Cup.

Duggan, part of a 24-strong England squad competing in the annual international friendly tournament, added: "I would like to apologise wholeheartedly to England, my club and anyone else that I may have offended.

"I am proud to be a 'Next 20' ambassador for Kick It Out and take this role very seriously for an organisation that does such good work."

The striker has been in good form of late, helping the national side to a perfect start in their World Cup 2015 qualifying campaign in which they have scored 20 goals in four games and conceded none.

She also started England's first game of the tournament in Cyprus on Wednesday against Italy.

England face Finland on Friday, before on Monday playing World Cup hosts Canada, whom they beat in last year's final.