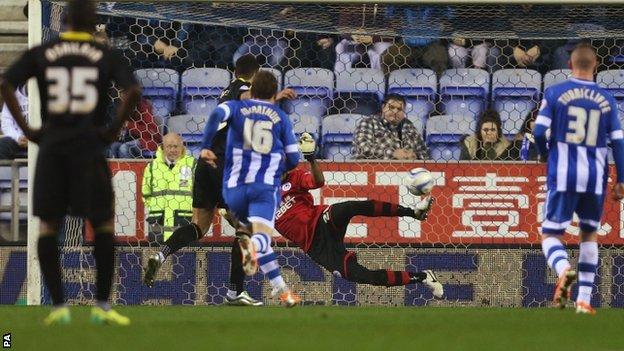 Jordi Gomez's late penalty boosted Wigan's play-off hopes as they recorded a seventh straight win in all competitions with victory against Sheffield Wednesday.

Gomez calmly converted to lift Wigan into seventh, with two games in hand.

The Latics, who beat Manchester City in the FA Cup quarter-final on Sunday, are level on points with sixth-placed Reading and have lost just once in their last 11 matches.

Wednesday gave as good as they got for long periods against their lacklustre hosts and were awarded a penalty before half-time when Jacques Maghoma raced through and was taken out by Al Habsi.

The Oman goalkeeper, who the visitors believe should have been sent off, made up for his error though when he dived to his right to save Best's penalty.

Wigan improved after the break with James McClean and Callum McManaman going close as the hosts pushed for the winner.

And, after Perch was fouled by Lavery, Gomez scored a crucial winner.

"Sheffield Wednesday's was a clear penalty for me. Was it a red card? I have to say the ball had travelled away from goal, and James Perch was in a position to intercept.

"I would say no, it wasn't a red card. But I can understand Stuart being very disappointed.

"In his position, I would probably be the same."

"I was thinking we had a penalty, against a substitute goalkeeper, and I couldn't believe it when the yellow card came out.

"Jacques Maghoma has got the ball, he's gone around the goalkeeper and he's wiped him out.

"I was amazed when he only got a yellow, and then he pulls off a save that stops us from taking the lead."