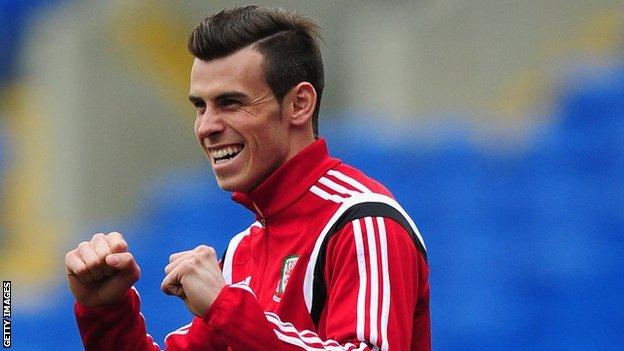 Wales manager Chris Coleman says Gareth Bale could play the whole of the home friendly with Iceland on Wednesday.

Bale, who has scored five times in his last seven Real Madrid games, was "raring to go", Coleman said.

"If he starts, we are looking to play him for 90 minutes. We will go into it with the right mentality and will try to win the game and start with our strongest team," he added.

Wales midfielder Joe Ledley is out, but skipper Ashley Williams is fit.

In September, soon after Bale's world-record move from Tottenham, Coleman defended his decision to rest the player as their 2014 World Cup qualifiers drew to a close.

But the 24-year-old's enthusiasm to be involved for a friendly at Cardiff City Stadium, following what Coleman described as a "brutal" derby against Atletico Madrid, is a boost for Wales.

He's a special talent, he's an incredible athlete and he has surprised me how quickly he has come up to the level that's needed to play at that level

"I was never worried about him," said Coleman.

"He has been here before when he's known he is not going to play and has made the trip anyway to be with us.

"It is great to have him. He was involved in a tough game at the weekend - the Madrid derby was brutal at times.

"My heart was in my mouth on one or two occasions, but he has come through that. He is here and raring to go."

A thigh problem and other niggling injuries affected Bale's initial progress in the Spanish capital, but Coleman believes the Cardiff-bred player has answered any critics.

"Not so long back I was reading that he hasn't really settled and he was getting a little bit of criticism from the Spanish media," he said.

"But if you look at his stats, I think he has 14 goals and about a dozen assists, which is not bad for his first year, considering he never had a pre-season.

"Every game I have seen, especially in the last month, he has looked his normal self.

"He's a special talent, an incredible athlete and he has surprised me how quickly he has come up to the level that's needed to play at that level."

The game against Iceland is the start of the build-up for Wales' Euro 2016 qualifying campaign.

Wales have been drawn against Belgium, Bosnia-Hercegovina, Israel, Cyprus and Andorra in Group B.

Coleman's side also have a friendly confirmed against the Netherlands in Amsterdam on 4 June, and begin the Euro 2016 campaign at home to Andorra on 9 September.